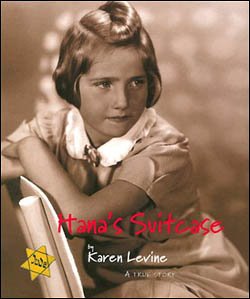 TWO of the main characters in the story of Hana’s Suitcase will appear in Melbourne tonight, March 23, 2010.

Fumiko Ishioka and Lara Hana Brady are scheduled to meet school children and other audiences in Melbourne, Sydney and Perth during their current trip to tell them the remarkable tale of a suitcase that belonged to one of the Holocaust’s six million Jewish victims.
The true-story, published in Australia in 2003, tells of Ishioka’s journey to discover more about Hana Brady — the name of a girl who had owned a small suitcase that ended up on display at the Tokyo Holocaust Centre.
Ishioka had been sent the suitcase from the museum at Auschwitz as an artefact to help teach the lessons of the Holocaust to Japanese children. She found though, that she wanted to know more about its owner.
She eventually tracked down Hana’s brother, George — the father of Lara Hana Brady —¬†who told her that Hana had been gassed in Auschwitz.

Surviving the war, George had made his way to Canada where he made a new life for himself, one in which he rarely spoke about his experiences during World War II.
Hearing of the story, Canadian journalist Karen Levine wrote a children’s novel about Ishioka’s discovery and Hana’s short life. That novel was also made into a¬† film by documentary maker Larry Weinstein.
Ishioka and Lara Hana Brady’s visit to Australia has been facilitated by members of Perth’s Jewish community. Teacher Shirley Atlas dreamed of inviting Ishioka to speak to Carmel School students and her dream was realised through another local resident, Dr Linda Friedland’s, visit to Tokyo and the Schaffer family’s sponsorship.
It is the first time Ishioka, who has travelled to North America and South Africa to tell Hana’s Story, will speak about the book in Australia.