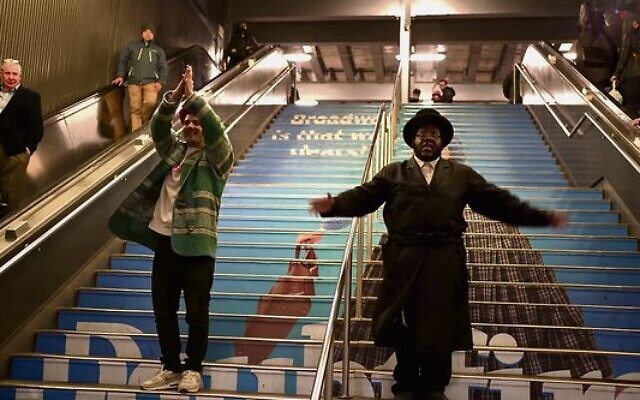 Kosha Dillz (left) and Nissim Black in the video for The Hanukkah Song 2.0.Photo: Screenshot.

It features the musicians – two of the best-known Jewish rappers making music today – gallivanting around New York City, riding the subway and hobnobbing with sidewalk vendors in Times Square.

“Aw man, yes, Chanukah,” they sing in the chorus. “The flow is so iconikah.”

Tackling topics including the miracles at the heart of the holiday and the role of God in protecting the Jewish people over time, “The Hanukkah Song 2.0” also features lyrics such as “You know we’ve been down, but we’ve come around, they put our heads down and God took us out. For eight nights we make a great light and we show the world we’ve won.”

The song also pays tribute to Sandler, with Black rapping at one point, “If you see Adam Sandler on the street, tell him put me in the scene in the movie!”

Meanwhile, talk show host Stephen Colbert also got in on the festive fun, lamenting the dearth of Chanukah-themed movies on his program.

There are tons of Christmas movies but so few Hanukkah films so tonight we’re bridging the gap. #Hanukkah #HanukkahMovies #ChristmasMovies #LSSC pic.twitter.com/8muaw2cA72

“That is a shanda, everyone deserves holiday movies,” he said, before playing a segment with a courtroom drama in which a latke is “Gelt-y as Charged,” a James Bond reference, “Casino Dreidale,” as well as “Eight Knights of Chanukah,” “Rudolph the Red-Nosed Rabbi” and “I Wish We Celebrated Christmas”.