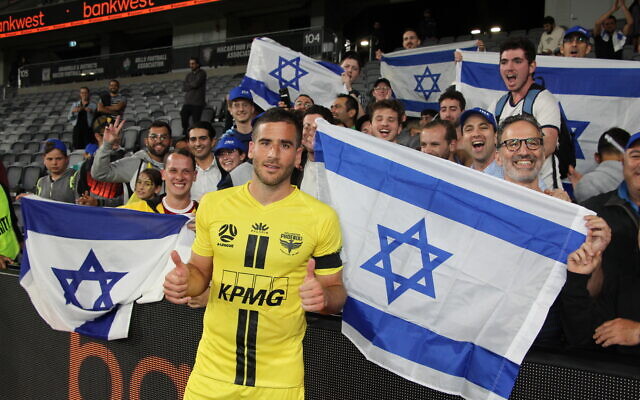 TOMER Hemed – who became the first Israeli to play in the A-League last season – will continue playing in the competition for another season, but in a red and black shirt instead of a yellow one.

Hemed scored 11 goals in 21 games for the Wellington Phoenix, and hopes to score even more in 2021-22 for the Western Sydney Wanderers, whom he signed a one-year contract with last week.

Speaking to The AJN on Tuesday from Queensland, where he is enjoying an off-season holiday with his wife Shunit and their three young children, Hemed said he feels excited to be joining the Wanderers as their key striker, and can’t wait to meet their playing group in two weeks for the start of pre-season training.

“I had options to play here [in the A-League], in Israel and in Europe, and my first consideration is to think about it from a football perspective first … to find the right club for me, that has the ambition to win a title,” said Hemed.

“When I started speaking with the Wanderers, I could see their strong desire to do that.

“And when I heard it from their manager (coach Carl Robinson) and their owners (including chairman Paul Lederer) – that I am the guy who can help them win the title – I knew it’s what I wanted.

“There’s a lot of hard work and preparation to be done with the club, but I will give it my all for the team.

“I also knew the Wanderers have the best facilities, the best stadium, and passionate fans too.”

Hemed added that, as a family, “it was great to have a [contract] option in Sydney, because we’ve already been here for a year [as the Phoenix were based for most of 2020-21 in nearby Wollongong].

“So we know the local Jewish community well now, and we’re feeling at home here.”