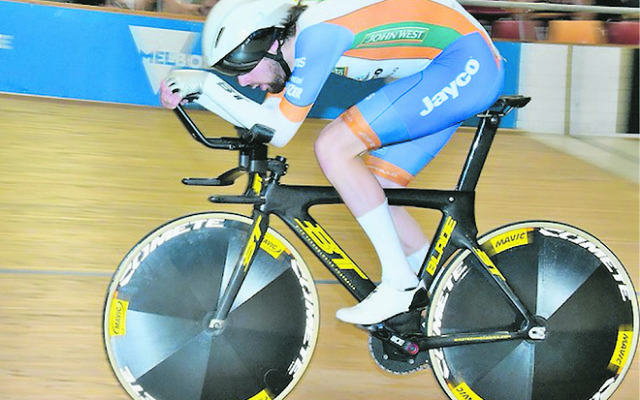 Riley Hart on his way to gold at the 2018 Victoria Elite Track Championships.

A KNEE injury and year 12 exams weren’t enough to stop Riley Hart from winning gold at the Victoria Elite Track Championships last month, which has qualified him for next year’s Track Nationals that begin on February 1.

The 18-year-old King David School student was pleasantly surprised by his time which saw him take out the gold medal in the Elite Men Gold Final Pursuit with a time of 4:29, cracking the 4:32 time needed in the process to qualify for the nationals.

“I am over the moon with it [the result],” Hart told The AJN.

With a persistent knee injury hampering Hart’s preparation, the teenager shrugged off the cobwebs to make his debut in the Elite group (open age) one to remember.

“Honestly, I had no idea what to expect.

“I also had my last year 12 exam two days before … Whatever time I rode would be a PB (personal best) because I had never ridden a 4km Individual Pursuit before.

“Crossing the line … I had an overwhelming feeling of joy, coupled with relief.”

Hart has an incredibly busy end to the year with one eye on the Under-23 Road Nationals in the first week of January and the Track Nationals in Queensland where he will be able to match himself against some of Australia’s best cyclists.

“Next up for me is the Elite Omnium Nationals; I’ll be racing Australian Olympic medallists and World Champions, so I’m looking forward to testing myself against them.

“That is quickly followed by the National Madison Championship … again against some of the world’s best track riders.

“[Over the next few months] I’ll be racing some of my childhood heroes like Cameron Meyer so that will be a blast, if a little leg-sapping.”

As an 18-year old graduate, Hart knows there is more to life than the bike.

He will take a break to trek to, and climb, Mount Kilimanjaro before turning his attention to the European circuit.

“I love racing in Europe and hope to start in some of the bigger under-23 road races,” Hart said.