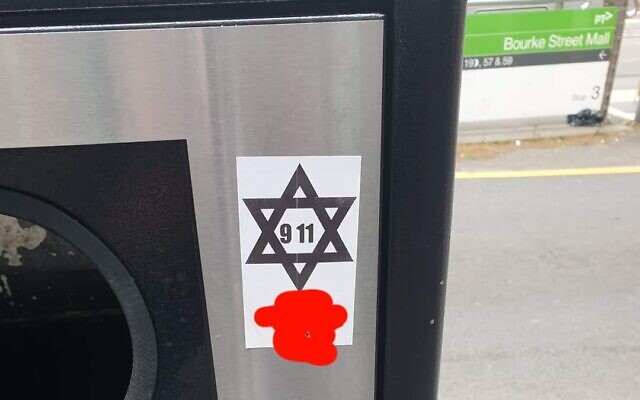 A sticker in Melbourne’s CBD.

THE latest annual report on antisemitism in Australia contains some alarming data. In the period leading up to late 2021, there have been 447 anti-Jewish incidents, a 35 per cent jump on the previous corresponding period.

The research identifies two significant causes for the spike: the Gaza conflict in May which exacerbated anti-Israel attacks and violations of COVID restrictions by a tiny sector of the Melbourne Jewish community which unleashed a storm of anti-Jewish activity.

Additionally, forces on the fringes of Australian society are persevering. From a stridently antisemitic rally by extremist organisation Hizb ut-Tahrir, to the furtive recruitment endeavours of the neo-Nazi National Socialist Network, the haters are out there and are not about to go away.

However, we can be encouraged by the bipartisan political endorsement of the International Holocaust Remembrance Alliance’s Working Definition of Antisemitism, which rightly describes denying Israel’s right to exist as an expression of antisemitism. As Union for Progressive Judaism co-president David Knoll told his organisation’s AGM a few days ago, “fighting antisemitism and standing up for Israel are two sides of the same coin”.

That’s a timely message at Chanukah, when we celebrate the defence of our Jewish homeland and our freedom to practise our faith.

But at what degree does freedom become harmful in itself? Should we also be free to decline COVID jabs, make offensive statements, or discriminate in employment practices? Some of these questions arise from the final draft of the federal government’s Religious Discrimination Bill.

While religious institutions should be free to make employment decisions inherently in line with faith principles, they should not be entitled to discriminate in hiring decisions unrelated to job requirements – or to make certain broad statements of belief that cause offence.

A Victorian bill seeks to limit the scope of these proposed federal laws. Although opposed by a small part of our community concerned with how it might limit their options in hiring and firing, it places eminently sensible boundaries around the federal proposals.