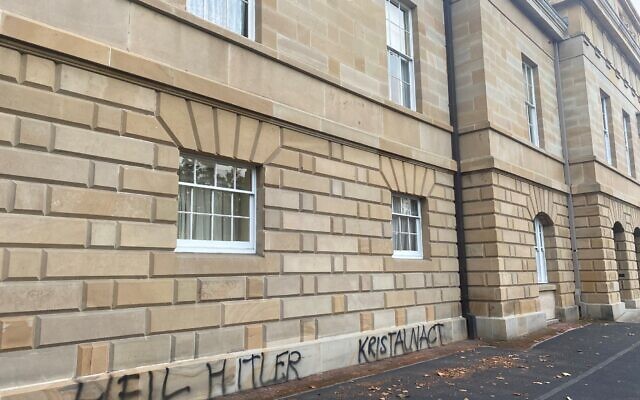 The graffiti scrawled on a wall of Parliament House in Tasmania last week.

TASMANIA Police are continuing to investigate an incident in which the words “Heil Hitler” and “Kristalnact” (sic) were spray painted on Parliament House in Hobart last Friday.

In a statement to The AJN, police said a male offender also attempted to scrawl a swastika on part of the building.

“This graffiti attack on our Parliament House is not merely a random act of vandalism. The words used are both an incitement to genocide and a call to overthrow our freedoms and democracy,” Hobart Hebrew Congregation president Jeff Schneider told The AJN.

“The response from governments and law enforcement agencies should be one of zero tolerance for heinous acts such as this.”

Anti-Defamation Commission chairman Dvir Abramovich added, “We have much work to do in fighting back against this kind of sickening intolerance, and we hope that those responsible are arrested and prosecuted to the fullest extent of the law.”

Anyone with information should contact Hobart Police on 131444 or report anonymously to Crime Stoppers on 1800 333 000.