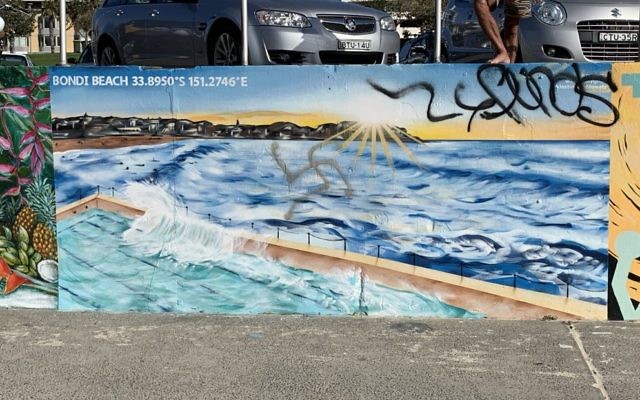 A comprehensive study has revealed a clearer picture of the state of reported hate incidents in Australia from 2014 to 2021.

The study was based on the reports of three targeted communities – Jewish, Muslim and Asian – the only communities who have a reporting and documentation system, and which produce reports on hate incidents against their community.

The study found that there were 3522 reported hate incidents in the seven-year period between September 17, 2014 and September 30, 2021. That amounts to an average of over one incident a day. There are two periods, corresponding to different reporting periods of the communities. 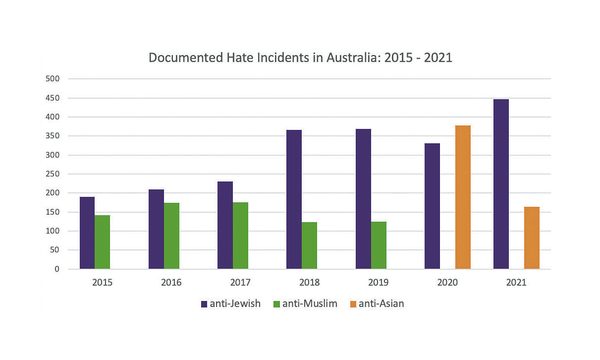 The intensity of hate incidents on communities can be understood through proportionality. According to the Australian Bureau of Statistics, in 2016 in Australia there were just under 100,000 Jews, 604,000 Muslims, and 2.4 million people of East and South-East Asian ancestry. This means that proportionally, for every 100,000 people in each community, there were 306 anti-Jewish incidents, 24 anti-Muslim incidents, and 18 anti-East/South-East Asian incidents, on average annually.

The Executive Council of Australian Jewry (ECAJ) has produced an annual report on antisemitism each year since 1990, spurred on by a spate of arson attacks on synagogues in 1990 and 1991. There was a total of 2142 anti-Jewish incidents reported for the seven years from October 1, 2014 to September 30, 2021; averaging 306 incidents annually.

The Islamophobia Register Australia (IRA) was established “in response to increasing harassment and attacks” against Muslims after police raids in Sydney and Brisbane in 2014. There was a total of 839 anti-Muslim incidents reported between September 17, 2014 and December 31, 2019, a 64-month period, of which 388 (47 per cent) were online posts/comments. The average number of anti-Muslim incidents annually for the five years between 2015 and 2019 was 147. 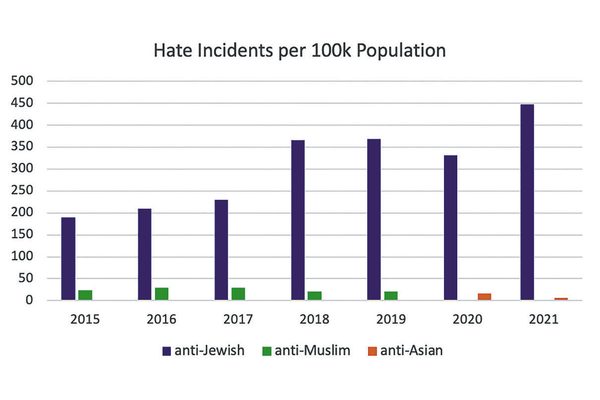 The hate incident data by these three targeted communities can be used by governments, human rights bodies, police, and others, to formulate policies and practices towards countering hate incidents. Hence, it is crucial that all those targeted by hate incidents report such incidents to the appropriate body, where there is one.

Julie Nathan is research director at the Executive Council of Australian Jewry.