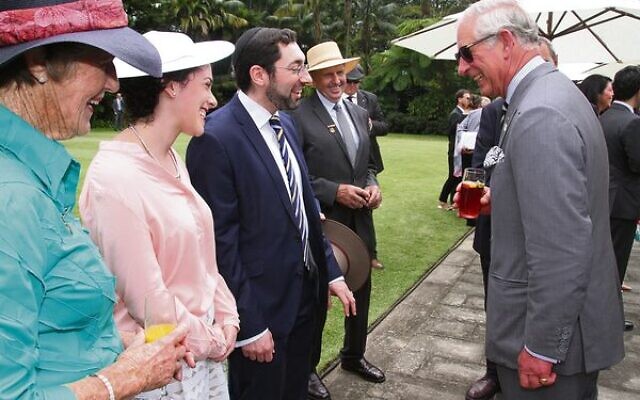 Rabbi Benjamin Elton and Rebbetzin Hinda Young meet the man who would be king.

The Great Synagogue senior minister Rabbi Benjamin Elton had to travel all the way from Manchester to Sydney to meet the new King of England.

Rabbi Elton and his wife Hinda Young had just arrived in Australia to take up their new posting in 2015, when as representatives of the NSW Jewish community they were invited by then NSW governor David Hurley (now Australia’s Governor-General) to a garden party to meet the then Prince Charles.

“I was there in the context of my role at the Great Synagogue and I was very lucky that I was the incumbent when he visited,” Rabbi Elton said.

He described the future king as “very engaged and interested”.

“He was very interested in the Sydney Jewish community and how we were doing and of course had a very warm relationship with Rabbi [Lord Jonathan] Sacks in London, so he was a great friend of Jewish communities everywhere,” Rabbi Elton said.

“He was clearly in control of his own progress through the crowd, he gave everybody time and engaged everybody.”

Rabbi Elton said Charles will be a “very good” king.

“He has had this extraordinary apprenticeship. He became the heir to the throne when he was four. Ever since, he’s really been conscious of who he is. He’s been trained for the role,” he observed.

“I think he has real wisdom and perspective. He’s already lived a fairly long life. And he comes to the role with the accumulated insights of 50 years or more in public affairs.

“He comes to the job already with great understanding of the role and what it requires.”

With the King certain to visit Australia in the future, Rabbi Elton said, “I hope I’ll be able to meet him in his new capacity as King.”

“I think he’ll prove to be a very worthy successor to Elizabeth II, but time will tell,” Leibler observed.

“He’s had a 70-year apprenticeship, and he’s had a chance to learn all of the lessons. And I’m pretty sure that he’ll put them to good effect.”

Being a dual British-Australian citizen, Rabbi Elton said that in some senses, “I was more connected to the events” of the Queen’s passing and what followed.

“On the other hand, I think there must be an extraordinary atmosphere in England now, which must be very palpable for those living in Britain, which is not quite the same here,” he said.

“But even here, I went to Government House to sign the book of condolence, I went to the proclamation of the new King at Parliament House.

He added that the time difference between the UK and Australia meant he was able to watch events unfolding in England that he otherwise would have missed.

“All the events that took place on Saturday after the Queen died, I wouldn’t have been able to see live had I been in England, but I watched them live from Australia, because Shabbat had already ended.”