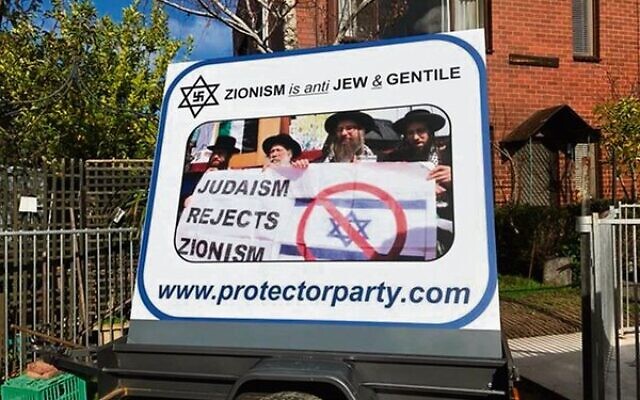 Casley is running against James Newbury for the seat of Brighton.

Last year Casley was investigated by Caulfield police to determine whether he broke lockdown rules after leaflets linking to his website were placed in mailboxes in the Caulfield and Brighton areas.

Casley’s website contained links to David Icke’s site, claiming that COVID-19 is a scam, controlled by the Global Elite, notably the Rothschilds, and contended that “Zionism is racist, apartheid, political-economic terrorism,” compared “evil” Zionism to Nazism, and stated that Zionists control Australian politicians.

In a YouTube interview, Casley claimed that the COVID-19 “lie” would “make Goebbels look like a Sunday school teacher” and compared Zionists to Hitler, in saying, “They occupied Palestine liked Hitler occupied France.”

The independent candidate also placed a billboard at a property in Brighton in 2019 showcasing a swastika inside a Star of David next to the words, “Zionism is anti-Jew and Gentile.”

“We are a democracy but him standing as a candidate has caused deep concern among my constituency,” he told The AJN.

ADC chairman Dvir Abramovich said, “The extremist rhetoric spewed by Mr Casley has no place in our multicultural society,” and said he “should be rejected by the residents of Brighton”.

Contacted by The AJN, Casley doubled down on his comments saying “anyone who accepts Zionism is wrong”, as it is “a form of racism”.