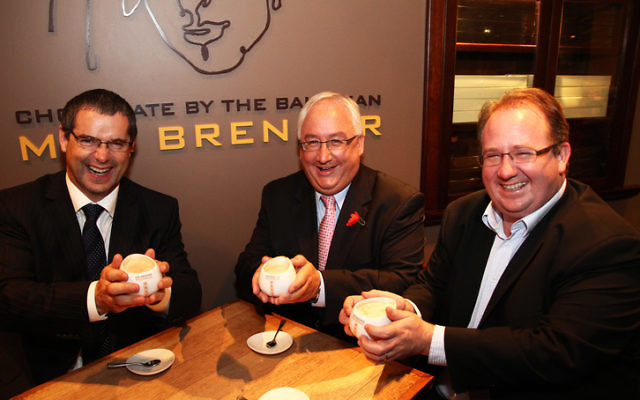 Steven Conroy, Michael Danby and David Feeney showing their solidarity against the BDS with a hot chocolate at Max Brenner's in South Melbourne. Photo: Peter Haskin.

IF embattled federal Labor MP David Feeney is forced to recontest his seat because of citizenship issues, the Liberals are likely to run a candidate in order to preference against any Greens candidate favouring boycotts, divestment and sanctions (BDS) against Israel.

Victorian Liberal Party president Michael Kroger said that even though polling shows the Liberals are unlikely to win Feeney’s inner Melbourne seat of Batman, heading off a likely Greens victory – and enabling Feeney, a pro-Israel, pro-US MP to win – was something the Liberals are actively considering.

Feeney has taken part in a number of anti-BDS campaigns in the past, showing solidarity with SodaStream and Max Brenner when they were targeted by activists.

Feeney, who was elected to Batman in 2013 and again in 2016, has informed Parliament he is unable to find paperwork proving he was not a British citizen at the time of his election to the seat.

His case is before the High Court, which may rule that he has to recontest the seat in a by-election. Meanwhile, spurred by Feeney’s likely defeat at the ballot box, the Turnbull government has called for the Labor MP to face voters in a by-election.

Speaking on Sky News on January 22, Kroger said: “We didn’t run in a state seat in Batman recently; we decided not to run and the Greens defeated Labor. We haven’t decided yet but we’re considering whether we would run in a [federal] by-election [for Batman]. If we didn’t, it would be likely that the Greens would win that seat from Labor.

“We would do everything we can to check on the credentials of these Greens candidates. You’ve seen a number of anti-Semitic comments by Greens members and senators, you’ve seen Greens participate in the discriminatory BDS campaign against Israel.

“So we would go through every Greens candidate’s credentials, their speeches, their participation in BDS rallies, to see if there were any elements of anti-Semitism, and if there were, we would probably run and would certainly preference against the Greens candidate, particularly in the case of someone like Feeney, who has been very pro-Israel and pro-American,” said Kroger.

Caulfield MP David Southwick told The AJN that in this year’s state election, Victorian Liberals “will not be looking at preferencing any Labor or Greens candidates who support BDS. As [state Liberal leader] Matthew Guy has said, we consider ourselves to be a pro-Zionist party and strong supporters of Israel”.