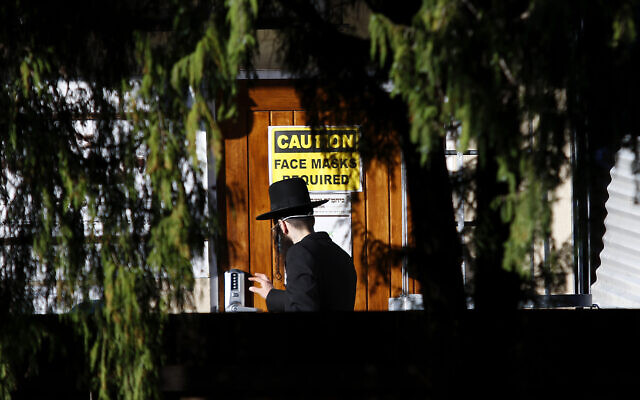 A member of the Satmar community arriving at his shule in Ripponlea this week.

VICTORIAN Premier Daniel Andrews has warned those in the Jewish community, as in all communities, who may be exploiting loopholes in COVID-19 restrictions, that to gather for worship will incur “significant penalties”.

Asked by The AJN about skirting the spirit of the coronavirus restrictions, Andrews did not mince words. Confirming he has heard reports about loopholes being used in some sections of the Jewish community, he said, “I’m not a faith leader, so I won’t offer any faith commentary, but I would have thought at a time like this, those who have that gift of faith and are religiously observant … would have a unique understanding that kindness and generosity towards others and the acceptance of the fact that we’re all in this together – and that each of us should treat others the way we would like to be treated, that’s safely and responsibly – I would have thought that was a message that would resonate with all of those people of faith.

“It would be a terrible thing if families were forced to plan funerals because anyone in any community had thought that this virus didn’t apply to them. It applies to everyone, it’s so wildly infectious. Anyone who’s breaking the rules is putting themselves at risk, every family at risk, and sadly Victoria Police will have no hesitation and no alternative but to apply significant penalties,” Andrews said late last week.

Amid reports an ultra-Orthodox Jewish group in Melbourne is continuing to hold gatherings despite the Stage 4 lockdown,…

Posted by The Australian Jewish News on Sunday, August 16, 2020

The AJN understands Adass began support groups ending in prayer sessions at its Elsternwick school, stopping last week to clarify its position under Stage 4, then resuming this week. The move reportedly came after some members were drawn away to the Satmar meetings, which first came to the attention of police and the Department of Health and Human Services (DHHS) earlier this year and are continuing. Adass had no comment and Satmar group leader Motty Fixler did not respond to The AJN as of press time.

DHHS has stated support groups for issues such as mental health, drugs, alcoholism and family violence can be held if they conform to COVID-19 restrictions. Police confirmed Adass notified them and DHHS of its plans. It is understood Adass is enforcing pre-registration, a limit of 20 attendees, temperature checks on arrival and distancing.

The Community Security Group (CSG) has been involved in the discussions, and “we certainly are aware of some of the frustrations in the [Jewish] community”. He said a support group is not “for people to come together and have a conversation, it needs to be in support of a health outcome”.

CSG CEO Justin Kagan added, “Those continuing to defy or bend the restrictions are putting themselves, their families, our community and all Victorians at risk of illness and death.”

A DHHS spokesperson contacted by The AJN stated, “We urge everyone to do the right thing by not looking for loopholes.”

Australian Jewish Medical Federation Victoria president Dr Jack Green added, “Clearly the intention of the rules is not to allow people to congregate. The spirit of the law is for people to socially separate.”