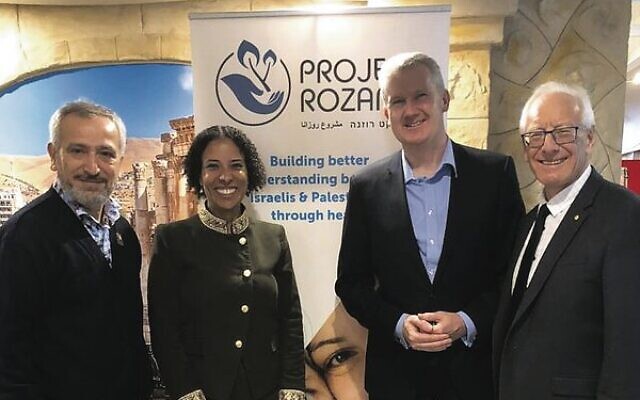 PROJECT Rozana has faced down a challenge from pro-

Palestinian activists and has been granted interim full membership of the Australian Council for International Development (ACFID).

It enables the NGO, founded in 2013 by Hadassah Australia to train Palestinian healthcare workers in Israel and treat Palestinian children in Israeli hospitals, to join a select group of Australian organisations in the international aid and development sector.

But accreditation to the peak body has been a tough process, with the Australia Palestine Advocacy Network (APAN) lobbying to have the application rejected.

In a submission to ACFID, APAN issued a scathing rebuke, describing Project Rozana’s work as “neo-colonial at best, a cynical use of Palestinians for the Israeli cause at worst”.

In a statement, Ron Finkel, chair of Project Rozana International, and deputy chair Dr Jamal Rifi rejected the criticism as “misplaced and a poorly conceived attack on many passionate Palestinian doctors, nurses, therapists and educators” who have lauded the organisation since it began in Australia.

“Our mission was embraced by former PA Minister of Health Dr Hani Abdeen, his successor Dr Mai al-Kaila, the first woman to hold that office, and Dr Riad Malki, the Palestinian Minister of Foreign Affairs,” he said.

“We also enjoy the support of senior Palestinians including Walid Nammour, CEO of East Jerusalem-based Augusta Victoria Hospital, and Izzat Abdulhadi, head of the General Delegation of Palestine to Australia.”

Dr Rifi, well known for his work in southwest Sydney to vaccinate vulnerable people against COVID-19, said Project Rozana “is viewed as an apolitical entity and a neutral player with an acknowledged track record”.

“Our focus is the health and wellbeing of Palestinian children in the West Bank and Gaza. We work tirelessly to train Palestinian health workers in Israel in order to build Palestinian self-sufficiency in its health network,” he said.

“Thousands of Israelis and Palestinians volunteer to drive these children from their homes to hospitals in Israeli via the checkpoints on the border of Gaza and the West Bank. Without this support, many Palestinian families would be unable to afford to high cost of commercial transport.”

Project Rozana was named for Palestinian Rozana Salawhi, who was treated at Hadassah Hospital after a fall from the window of her Ramallah apartment in 2012 when she was four.