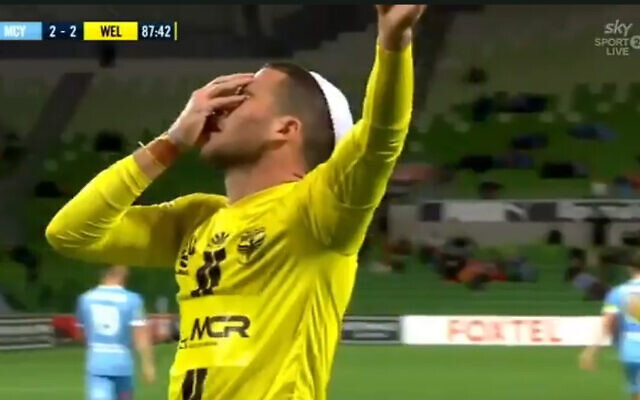 IN Tomer Hemed’s finest game so far for the Wellington Phoenix, Israel’s first ever player in the A-League combined impressive skill with raw emotion in a man-of-the-match performance on a wet AAMI Park Stadium pitch, scoring both of the Phoenix’s goals in their 2-all draw against home team and competition leaders Melbourne City.

Despite the horrid weather, a group of more than 20 Jewish football fans were lucky enough to witness Hemed’s magic from the stands, thanks to an initiative by Maccabi FC Caulfield and Maccabi Victoria.

And Hemed, overcome with emotion given current events in his home country, celebrated each of his goals with them with all his heart and soul. 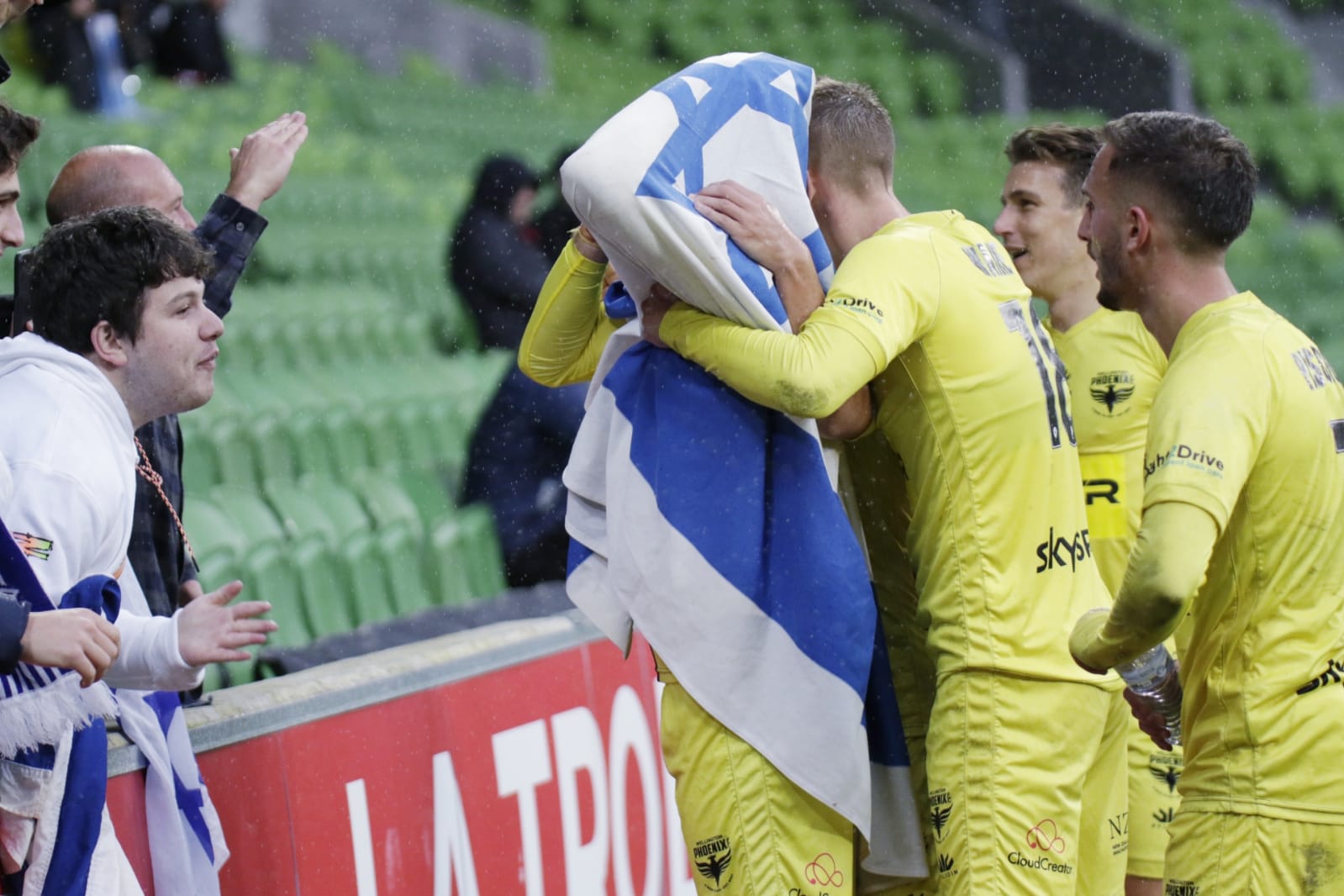 He scored his sixth goal of the season by calmly nailing a 37th-minute penalty, and immediately wrapped himself in a fan’s Israeli flag.

Then, with the Phoenix trailing 1-2 and only minutes remaining, the 34-year-old striker positioned himself perfectly near the goal mouth to receive a cross, and demonstrated silky skills and deft touch to toe-poke the ball past the keeper into the left corner of the goal.

Hemed’s goal celebration this time was next level, as he reached for a kippah under his jersey, and briefly put it on his head while pointing to the sky and reciting the start of the Shema prayer, before sprinting to embrace the Jewish fans.

With players not permitted to wear coverings of any type on the pitch, Hemed received a yellow card.

After the match, Hemed posted on Instagram: “This game is dedicated to you, my dear country. My heart is with you. May the peace return soon, amen.”

Phoenix coach Ufuk Talay heaped praise on Hemed for his performance, saying, “He gives us that presence up top that we need.

Wellington will play their remaining home games back in New Zealand after being temporarily based in Wollongong so far this season, and their draw against Melbourne City kept their slim finals hopes alive.

The night before the match, Hemed and his wife Shunit attended a private Maccabi dinner in Caulfield North with Football Victoria CEO Kimon Taliadoros, where Hemed spoke fondly of “feeling the warmth” of the Jewish communities of Melbourne and Sydney.

Maccabi FC Caulfield president Kevin Milstein told The AJN it was an exciting and unique opportunity, and an “extra bonus”, to see Hemed score both of Wellington’s goals – not only for the Jewish fans in attendance, but for all young aspiring Jewish footballers.

“Knowing that many dozens of Jewish children will have been watching in Melbourne, or at least hear of Tomer’s exploits, means that our Maccabi FC children can see that through their hard work, they too can have the same opportunities that Tomer created for himself,” Milstein said. “Tomer has now lit the pathway for them.”