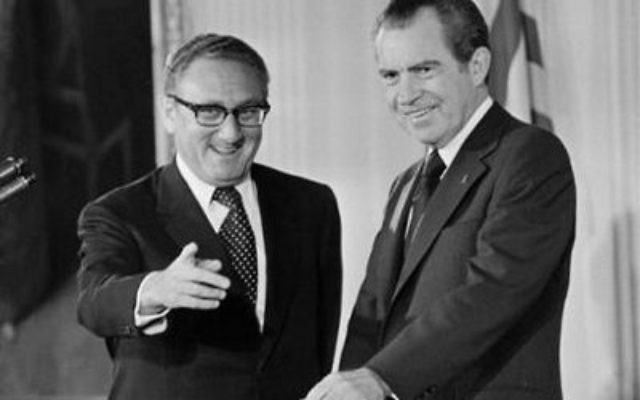 FORMER US Secretary of State Henry Kissinger apologized Friday for a recently revealed remark from 1973, where he said it was no concern of the US if Soviet Jews were gassed.
“For someone who lost in the Holocaust many members of my immediate family and a large proportion of those with whom I grew up, it is hurtful to see an out-of-context remark being taken so contrary to its intentions and to my convictions, which were profoundly shaped by these events,” Kissinger wrote in the Washington Post. “References to gas chambers have no place in political discourse, and I am sorry I made that remark 37 years ago.”

In recently released White House audio tapes, Kissinger was heard saying: “The emigration of Jews from the Soviet Union is not an objective of American foreign policy…And if they put Jews into gas chambers in the Soviet Union, it is not an American concern. Maybe a humanitarian concern.”

In his Washington Post article, Kissinger wrote that Jewish emigration from the Soviet Union had never been put forward as a formal US position “not because of moral insensitivity but because intense crises imposed other priorities.”

Referring to his conversation with then-President Richard Nixon, where his gas chambers remark was made, Kissinger wrote: “The conversation at issue arose not as a policy statement by me but in response to a request by the president that I should appeal to Senators Javits and Jackson and explain why we thought their approach unwise.”

“My answer tried to sum up that context in a kind of shorthand that, when read 37 years later, is undoubtedly offensive,” he wrote. “It was addressed to a president who had committed himself to that issue and had never used it for political purpose to preserve its humanitarian framework.”