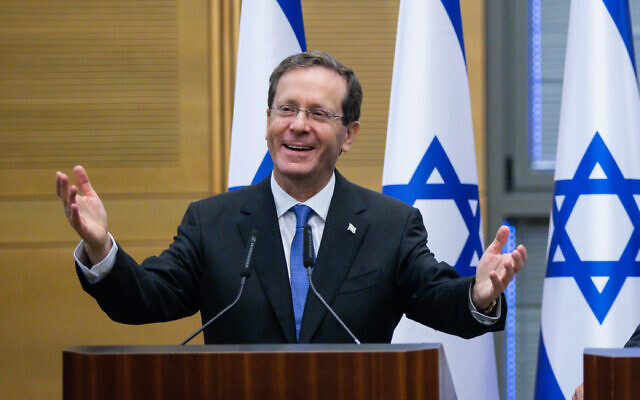 AHEAD of being sworn in as Israel’s new president yesterday (Wednesday), Isaac ‘Bougie’ Herzog revealed his strong interest in and sense of connection with Australia and its Jewish community – and what leadership approach he will take as president.

In a webinar last week, jointly hosted by UIA Australia and the Zionist Federation of Australia (ZFA), a version of the famous song of prayer for Israel, Avinu Shebashamayim, was played, which clearly moved the former Jewish Agency chairman and Labour Party leader.

“Just yesterday, we had the yahrzeit for 62 years since he passed away, so of course, it touches my innermost feelings.”

“Some of you were children [back then] – and it has struck so deeply in the thoughts and hearts of so many of you who are still active, and are now leaders in, the [Australian Jewish] community.

“I have been following Australia-Israel relations since I went into politics, and I care deeply about the unique relationship between our nations.

“In my capacity as president of Israel, I will do whatever I can to foster and strengthen these relationships … and I hope to be visiting you as well!

“I thank you wholeheartedly for your great support of the State of Israel.”

Herzog also spoke about the “very worrying challenge” of a global rise in antisemitism, “in combination with anti-Israelism”, particularly during and since the recent Israel-Gaza conflict, when there was often a, “cruel misjudgement of the facts” in media reports around the world.

“I sat in a [bomb] shelter, as I did at the age of six during the 1967 war … and no-one who criticised us has gone through this experience.

“A lot of efforts are going to be put again into securing and helping Jewish communities abroad, and also presenting our [Israel’s] case better.”

Hinting at what his presidential leadership style will be, Herzog said that coming from a family with such a proud record of service has meant, “I carry this weight on my shoulders … as an emissary of the Jewish people all my life – that’s what brought me to politics”.

But he said each generation has to focus on and address the challenges of the time, so while “I can learn from my previous generations, as the saying goes – now it’s on you.

“It’s my shift, and so I think that’s what advice they [his father and grandfather] would have told me – it’s your shift, so do the best you can for your people and your nation. And I intend to do exactly that.”

Keren-Hayesod’s World Board of Trustees chairman Steven Lowy said, “There is no doubt in my mind that Bougie is the right person at the right time to become the next president of Israel”.

Noting Herzog’s various former roles, including serving as Israel’s Opposition Leader and as a minister with many portfolios, Lowy said he “is not in his position due to his name – he is there due to his personal achievements and career serving the State of Israel and the Jewish people”.

“It will be a great honour to address you as Mr President.”