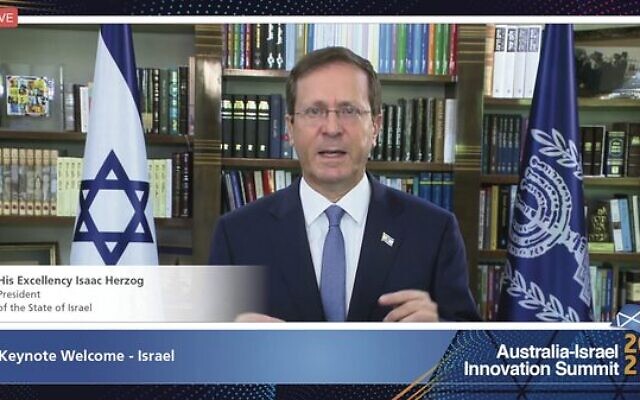 In the business world, unicorns mean new private companies or startups valued at more than one billion dollars.

Noting how the pandemic has led to unprecedented disruption in business and industry operations, Herzog emphasised how this not only creates challenges, but transformative opportunities.

“Throughout the past 20-odd months, Israel has continued its growth, from a ‘start-up nation’ to a ‘scale-up nation’, and some would even say we’ve grown into a unicorn nation!” Herzog said.

“There is a lively discussion over the causes for the rapid growth in Israel’s unicorns … one that’s particularly relevant is how Israel’s success – and indeed survival – has been dependent on its ability to be flexible, adaptable, creative and focused more on solutions rather than processes.

“It’s these same qualities which enabled Israel’s start-ups to quickly adapt to the new realities of the pandemic, and to continue to grow.

“We are eager to share our experience and expertise with our close friends in Australia, with whom we share a focus on areas such as smart agriculture, renewable energy, cyber-security and digital health.”

Herzog also personally congratulated the AICC for its “50 years of outstanding work”.

“You’ve made it your priority to connect Israeli and Australian political, business and thought leaders … thank you for all that you do to strengthen our bond.”

At the summit, Australia’s trade minister Dan Tehan noted how two-way trade between Australia and Israel reached more than $2 billion in 2020/21, up from $1.3 billion the year before.

“But the Australia-Israel trade relationship has even more room for growth … and the government has commissioned a feasibility study into strengthening that, including a potential free trade agreement.”

Key talking points were the need to bolster the funding of the universities sector, address growing skills shortages in the start-up space, and expand collaborative partnerships.

Meanwhile, in more good news for Australia–Israel business ties, Israeli fin-tech security firm Riskified announced it will launch its first office in Australasia, to be located in Melbourne, on November 10.