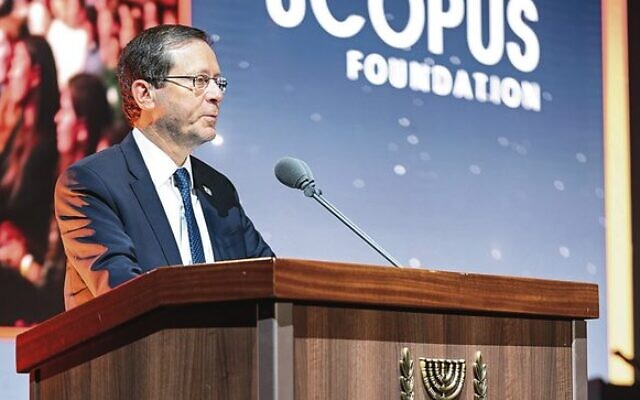 The President’s visit will coincide with the 75th anniversary of the school.

At the recent celebratory event hosted in Israel by the Scopus Foundation, Gold recalled that he was a student at Mount Scopus in 1986 when Herzog’s father, the late Chaim Herzog, became the first Israeli president to come to Australia. Since then, Gold noted, every Israeli president has visited Australia.

“I hope that you too can join us to celebrate the 75th anniversary of the founding of Mount Scopus, which will take place in 2024 and also to break ground on a new state-of-the-art campus and community centre that will be a model for every Jewish community in the world,” Gold said.

In response, President Herzog recalled his father’s admiration for the commitment which Scopus’ founders had for the importance of Jewish education.

“For him,” Herzog said, “it was not a given that Jewish education would be able to reinvent itself to be able to meet the needs of a changing world, as the Jewish people returned home from the brink of destruction. The founders of Mount Scopus shared a similar concern for the Jewish future.”

Gold told The AJN he was “delighted” that Herzog would be visiting Mount Scopus in ­person.

“When you do come, you will encounter a school whose pride is unmatched and where an intense passion for Judaism and Israel permeates,” he said.

“Where success is not just measured by academic achievement but by what well-rounded young adults we have created. A school which is fundamental to what has made the Melbourne Jewish community one of the most dynamic and successful of Diaspora Jewish communities.”