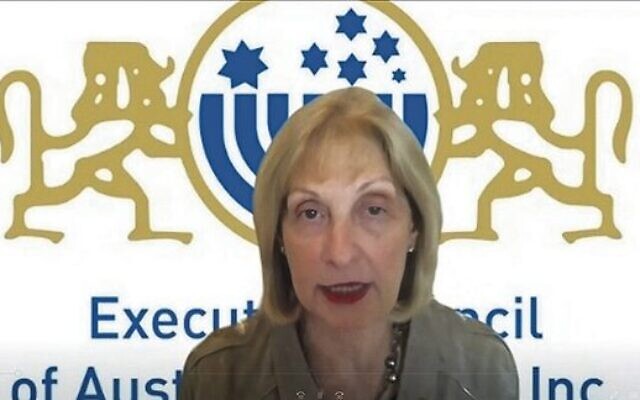 THE Australian government’s decision to proscribe terrorist organisation Hezbollah in its entirety was a major milestone of the past 12 months, Executive Council of Australian Jewry (ECAJ) president Jillian Segal stated in her report to Sunday’s annual conference.

“The ECAJ … together with others, has been advocating this for many years both generally and in submissions to and presentations to ministers and intelligence and security committees,” she said.

“I think it is a testament to our resilience and fortitude in continuing to advocate for these things that it’s finally come to pass – and we await hopefully a similar decision regarding Hamas next year.”

On issues relating to the ABC’s reporting of Israel, Segal said the announcement of a review into the ABC’s complaints unit “should be seen as a positive step”.

She said that although Senator Andrew Bragg’s review has been suspended, “the reviewers appointed by the ABC itself are eminent persons, including the previous federal ombudsman, and they’ve just released a discussion paper calling for submissions that really does give scope for the sorts of submissions we would want to present”.

Segal noted political leaders from the government and opposition denounced hate speech against Israel during the Israel-Hamas conflict, and in an ECAJ online meeting in July, ALP leader Anthony Albanese “unambiguously repudiated the slur that Israel is an apartheid state”. Albanese’s firm rejection of BDS became a resource in enabling Labor Friends of Israel to help defeat a pro-BDS resolution at the NSW ALP conference, she added.

Bipartisan political support for the IHRA definition of antisemitism was facilitated by ECAJ backgrounding, in collaboration with the Australia/Israel & Jewish Affairs Council and the Zionist Federation of Australia, she said. “Much work remains to be done, particularly in the university sector, but we are all determined to push that definition forward.”