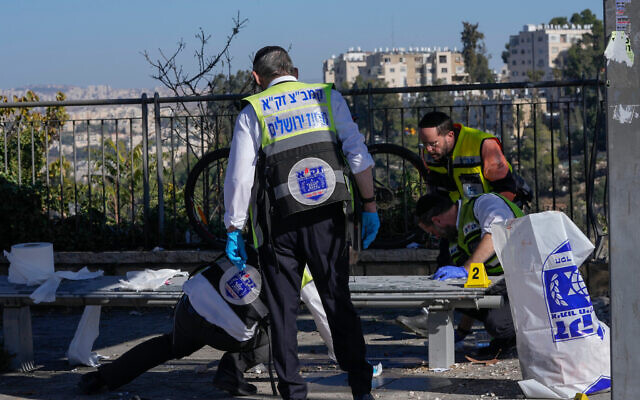 Members of Zaka Rescue and Recovery team clean blood from the scene of an explosion at a bus stop in Jerusalem, Wednesday, Nov. 23, 2022. Photo: AP Photo/Maya Alleruzzo

A senior officer said police were hunting for an organised terror cell that detonated two “high quality” explosive devices at two bus stops near entrances to Jerusalem on Wednesday morning, killing one and wounding more than 20 others.

Speaking to reporters, the head of the police operations division said the “two high-quality, powerful explosive devices with a high level of damage” were hidden behind the bus stop and in a bush.

The first explosion occurred close to the main entrance of Jerusalem in Givat Shaul, shortly after 7am, peak commuter hour. The second blast occurred shortly after 7:30am, at Ramot junction, another entrance to Jerusalem.

A 16-year-old yeshiva student, Aryeh Schupak, was killed and 22 people were hurt in the two attacks, including one listed as critical and another three in serious-moderate condition, according to medical officials.

Schupak, who was killed in the first bombing, was a Canadian national as well as an Israeli citizen, according to Canada’s ambassador to Israel.

The remotely detonated devices were packed with nails to maximise casualties, according to police officials.

Due to the nature of the attack with two near-identical bombs exploding within half an hour of each other at two bus stops, Deputy Commissioner Sigal Bar Zvi said police suspected an organised cell was behind it, rather than just one person.

“I believe we will capture the terror cell,” she said.

She added that there were no specific warnings about Wednesday’s attack, but there had been intelligence pointing to planned attacks in general.

Police also raised their level of alert following the attack, according to Bar Zvi.

The Ynet news site cited an assessment by unnamed defense officials as saying the terrorists knew the terrain well and had planned the attack long in advance.

The assessment reportedly said the attackers operated independently and were not guided by a handler in a larger terror group. There were no immediate claims of responsibility, but the Hamas and Palestinian Islamic Jihad terror groups hailed the attacks.

The terrorists remotely detonated the first bomb after ensuring that there were people next to it, then did the same with the second device, the officials said, according to the Ynet report.

The father of one injured teen said his son had observed a man taking pictures of the bus stop shortly before the explosion.

“He took pictures of the people at the bus stop and disappeared,” said Avi Biton, whose son is seriously wounded.

“My son was injured by a lot of shrapnel. He has one piece of shrapnel that is right in the skull, which cannot be removed, near a blood vessel. He has fractures in his vertebrae and pelvis, and bleeding in his stomach,” Biton said.

Visiting the scene, Israel Police Commissioner Kobi Shabtai said it was a  “framework of attack that we haven’t seen for many years.”

He called on the public to be alert for suspicious packages, and said officers were scanning the city for other possible devices.

The bombings came amid heightened tensions, following a series of Palestinian attacks that have left 30 people in Israel and the West Bank dead since the start of the year, including Wednesday’s attack.

In recent months there have been several stabbing and attempted stabbing attacks in Jerusalem, mostly in the Old City. Last month, a Palestinian gunman killed an Israeli soldier at a checkpoint near Jerusalem.

In the spring, the military launched a major anti-terror offensive in West Bank following the attacks.

The operation has netted more than 2,000 arrests in near-nightly raids, but has also left over 130 Palestinians dead, many of them — but not all — while carrying out attacks or during clashes with security forces.

Bombings on buses and in public places were a hallmark of the Second Intifada from 2000 to 2005, but mostly subsided over the last 17 years, which Israeli officials attributed to increased security measures, including the West Bank security barrier, and better intelligence.

In 2016, the Hamas terror group was accused of bombing a bus in Jerusalem, leaving 21 people injured. And in 2011, a bomb hidden in a backpack exploded at a bus stop outside the Jerusalem International Convention Center, killing two and injuring dozens more.