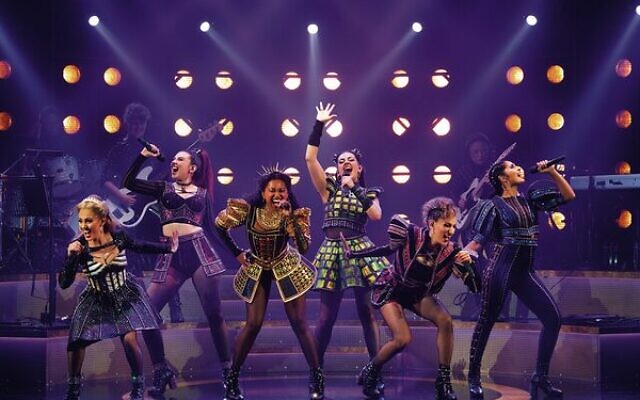 What do you get when you turn six dead queens into loud, sassy pop princesses? Six the musical, a record-breaking, Tony Award-nominated musical phenomenon.

Six completed a record-breaking 15-week run at the Sydney Opera House – becoming the longest-running show ever at the iconic venue – and will shortly be heading to Melbourne’s Comedy Theatre.

It’s described as a witty, pop-fuelled musical, that remixes the history of the six wives of Henry VIII, Britain’s notorious Tudor king, retelling and reclaiming their stories.

The combination of history with 21st century music, choreography and technology make the show even more engaging, as each queen pulls inspiration from a pop queen of today, including Beyonce, Adele, Britney Spears, Alicia Keys, Rihanna, Ariana Grande and more.

When The AJN asked the six main performers about their musical inspiration and historical namesake, there was a running theme in the answers – portraying such iconic historical women and drawing vocal inspiration from such legendary pop divas, left each performer feeling positive, strong and electrified.

Henry VIII’s wives are the subject of much fascination and speculation, which is perhaps why Six the musical has found such huge success.

Kala Gare plays Anne Boleyn, Henry’s second wife. “It’s an honour to step into her shoes each night … and bring truth and joy and humanity back to her after a history that has not remembered her kindly at all,” Gare said. “There is so much more to her and her story.”

Katherine Howard was Henry’s fifth wife – and fun fact, the maid of honour for his fourth, Anna of Cleves – and came under intense scrutiny for her dating history and illicitly meeting with another man during her marriage. She was executed by Henry VIII shortly after being stripped of her title of queen. But, according to Chelsea Dawson, who plays Howard in Six, it wasn’t all that it seemed. “Historically, Howard had a very short life,” Dawson explained. “Even though the life she lived was 480 years ago, the abuse she received is still very real today and makes her story so important to share.”

But it’s not all bad for the wives, according to Vidya Makan, who plays Catherine Parr, Henry’s sixth wife. “Catherine Parr is a symbol of knowledge, love and awesome generosity,” she said. “It is not lost on me that I am a woman of colour, of Indian descent, playing her on that stage. Growing up, I never saw anyone who looked like me on the professional musical theatre stage, so getting to play this role in all of my truth is incredibly empowering. I hope that young girls come to this show and see that they can be anyone they want to be. That they can be in control of their own narrative.”

As to taking inspiration from such fierce contemporary pop divas, all six stars of the show say it’s a dream come true. “[It’s] getting to live out your childhood pop star fantasies, but this time, it’s a real mic and not a hairbrush. You have to pinch yourself honestly,” said Phoenix Jackson Mendoza, who plays Catherine of Aragon.

While pop divas may be their muse, each queen puts her own spin on their songs, explained Kiana Danielle, who performs the role of Anna of Cleves. “Although there is inspiration, there is no pressure that you need to try and ‘be’ these pop divas. However, it helps you ground your version of the character and tap into the pop concert element of the show. It is a very cool thing to explore as a performer,” she said.

The sentiment is reiterated by Loren Hunter, portraying Jane Seymour. “It has been one of my career highlights to date,” she said. “The writers have been brilliant at linking these superstar divas to the superstar queens.”

Six the musical will be at The Comedy Theatre from June 17. For tickets, sixthemusical.com.au