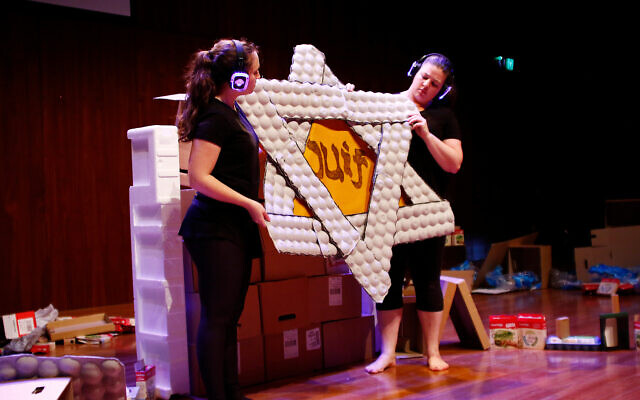 A theatre production, set around the memories of Holocaust survivors when they were children during the Nazi reign of terror, proved to be an invaluable educational experience for young audiences.

The production, Singing Swallows, opened at Theatre Works in St Kilda after being staged in Melbourne schools during 2017 and 2019. It’s the brainchild of contemporary theatre maker, director and producer Romi Kupfer, who also performs in it with two children, Flora Feldman, 10, and brother Sol, 12, who act on alternate days due to child employment regulations.

“They are both experienced performers and the grandchildren of Holocaust survivors,” Kupfer told The AJN. “Previously we have only performed Singing Swallows at schools, so this is its first public showing. It was meant to be staged at Theatre Works in April last year, but, because of COVD-19 restrictions, could not go ahead and was moved to June, but was postponed again to this year.”

Singing Swallows is designed for children aged from 9-18. During the show the actors and members of the audience wear headphones, which are supplied at the start of the performance, which runs for 35 minutes.

The narration is by children, designed to make the subject matter more relatable to younger audiences.

“I have removed the trauma associated with these difficult stories and experiences,” said Kupfer. “Young people will get a lot out of the show. When we performed at schools, it was for kids ranging from grade 3 to year 10, and we held discussions with the kids after each show.

“Of course, the year 10s had learnt a lot more than the primary age kids, and it was great to have these conversations with them and see what they brought to the performance and the discussion with their knowledge. The older kids knew the context of the production and could fill in the gaps, while younger kids may think the show is all they need to know.”

When Singing Swallows was staged in schools, Kupfer was joined by another adult, Tammy Cohen, in the cast, but now works just with the two children. During its season at Theatre Works, there was a broader age range in the audiences, including families and young adults. “There are many people who are not Jewish, who don’t know much about the Holocaust, and they want to see the show as an entry point to Holocaust education,” she said. “For them it’s about connecting with the idea that there are people like us who lived through these horrific experiences, and giving them a way in to know more about the Holocaust.”

Kupfer created the show in 2016 as part of her Bachelor of Performing Arts honours degree at Monash University. “Part of my thesis was creating this performance and I spent a lot of time researching it. I interviewed four Holocaust survivors, including my grandfather, about their experiences as young people during World War II.”

Her grandfather, Raymond Kupfer, speaks at the start and at the end of the show.

“I love the fact that his voice is going to be part of Singing Swallows forever. The stories that audiences hear in the show are voiced by young Jewish kids who were in primary school.”

When Kupfer interviewed the survivors, she probed everything from the type of food they ate to their favourite toys and home life. After each at Theatre Works performance, there was a Q&A with Kupfer and the child she performed with.

“Some members of the audience may have family who lived through the Holocaust while others may not have, and some may not be Jewish, so the Q&A session gave people an opportunity to ask questions about the show and the Holocaust. One of the main reasons why I made Singing Swallows is to pass on these Holocaust stories and to continue the importance of people connecting with the stories from those who survived and perished in the Holocaust.”

Kupfer attended Mount Scopus Memorial College until year 8 and then completed her studies at Leibler Yavneh College. She studied performing arts at Monash University and has a Masters of Directing for Performance from the Victorian College of the Arts. Her theatre work has grown since 2013 through collaborating with companies, artists and communities. Kupfer was a producer on The Dispute, one of the shows in the recent Rising festival which was cancelled during Melbourne’s COVID-19 lockdown. “We had our dress rehearsal and had to close on the afternoon before opening night,” she said. “The whole one-and-a-half-week season was cancelled, but hopefully it will be rescheduled.”