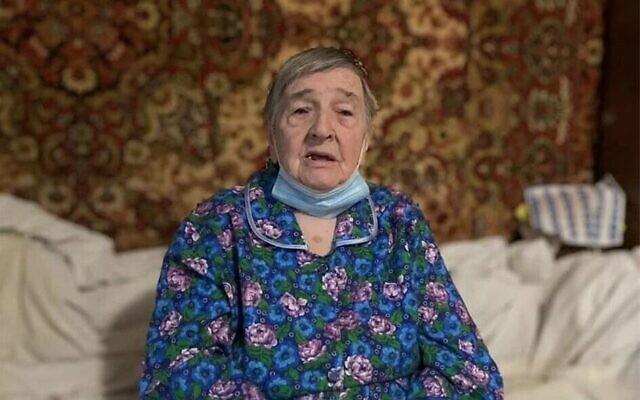 A Holocaust survivor died while sheltering from Russian strikes in the besieged Ukrainian port of Mariupol.

The bedridden 91-year-old Vanda Semyonovna Obiedkova died on April 4 after spending weeks in a basement without water or heating, her daughter Larissa told Chabad.org.

“Mama didn’t deserve such a death,” she said.

“There was no water, no electricity, no heat, and it was unbearably cold,” added Larissa, who was in the basement hiding with her mother. “There was nothing we could do for her. We were living like animals.”

Larissa said that in her final days, her mother was comparing the conflict to the Nazi occupation of the city in 1941.

“Every time a bomb fell, the entire building shook. My mother kept saying she didn’t remember anything like this during the Great Patriotic War [World War Two],” she said.

Larissa told Chabad that she buried her mother in a local park before escaping with her family.

Obiedkova was 10 years old when the Nazis occupied Mariupol in October 1941. They began rounding up the city’s Jews soon after.While she was able to evade the round-ups by hiding in a basement, the same fate did not befall her mother, who was taken away and shot.

She spent the next two years in a hospital, where her non-Jewish father managed to get checked in, until Mariupol was liberated in 1943.

Obiedkova got married and was an active member of the city’s Jewish community, said Mariupol’s rabbi, Mendel Cohen.

“Vanda Semyonovna lived through unimaginable horrors,” Cohen said. “She was a kind, joyous woman, a special person who will forever remain in our hearts.”

Obiedkova is the second Ukrainian Holocaust survivor confirmed to have died since Russia’s invasion began.

In March, Boris Romantschenko, who survived four Nazi concentration camps during World War II, was killed by Russian shelling that struck his flat in the Ukrainian city of Kharkiv. He was 96 years old.