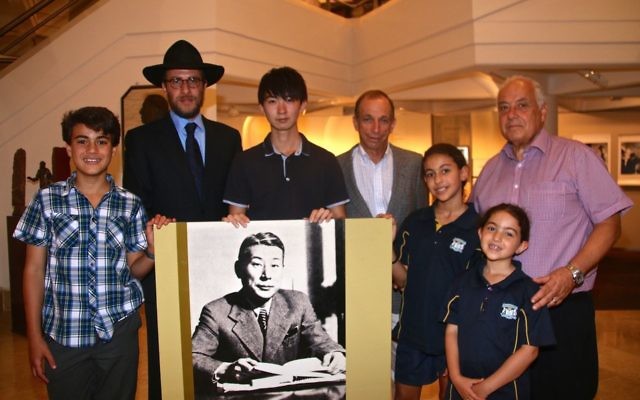 HAD Chiune Sugihara not issued visas – against his government’s wishes – to Lithuanian Jews fleeing the Nazis, Central Synagogue would not have Rabbi Levi Wolff, JCA’s CEO would not be Daniel Grynberg and John Roth would never have been president of the Sydney Jewish Museum.

Last week the communal figures joined fellow descendants of Jews saved by the former Japanese consul to thank his great-grandson, Keisuke Sugihara, 21, in a moving afternoon at the museum.

Chiune Sugihara provided approximately 3500 transit visas to desperate Jews in 1940 despite the Japanese foreign ministry’s refusal of his request to do so. He was recognised as a Righteous Among the Nations by Yad Vashem in 1984.

Keisuke, who plans to spend three months in Australia, told The AJN he is “very proud” of his great-grandfather.

“I respect it [what he did]. Chiune Sugihara ignored the Japanese Ministry, he obeyed his humanity,” he said.

“His determination is unbelievable for me.”

Keisuke first found out about Sugihara’s heroics at the age of six, through his elementary school history textbook and because “my mother told me ‘your great-grandfather saved a lot of people’”.

Although his link to Sugihara is on his mother’s side, he legally changed his surname to Sugihara earlier this year to honour him.

“We want to express our gratitude [to Keisuke] for the courage of his great-grandfather, which is immense,” he said.

“We hold Sugihara as a real hero, a real righteous gentile. My mother spent a long time travelling around NSW for Courage to Care talking about Sugihara, even at the age of 90.

“It’s an amazing story. Because everyone who didn’t leave Vilnius died.”

Rabbi Wolff, whose maternal grandfather was saved, said Sugihara could have easily turned a blind eye to what was going on.

“But he put his life in danger because he felt that the right thing to do was to stand up for what was right,” he said.

“And as an outcome of one person doing that, [there are] tens of thousands of people in this world today. And that goes to teach us a phenomenal lesson … One person can change the world.”

“What he did continues to foster friendship between Japan and Jewish communities around the world.”

NSW Jewish Board of Deputies CEO Vic Alhadeff, who escorted the Consul-General into the shul, commented: “Never before had the flag of Japan been mounted in Central Synagogue. Never had Rabbi Levi Wolff delivered such an emotion-charged sermon, pausing frequently to regain his composure. “And never had tears flowed so visibly from so many congregants.

“Japan’s Consul-General … delivered a stirring address to the 500 congregants.

“In the annals of Sydney’s Jewish community, it was an extraordinarily powerful, moving and memorable moment.”