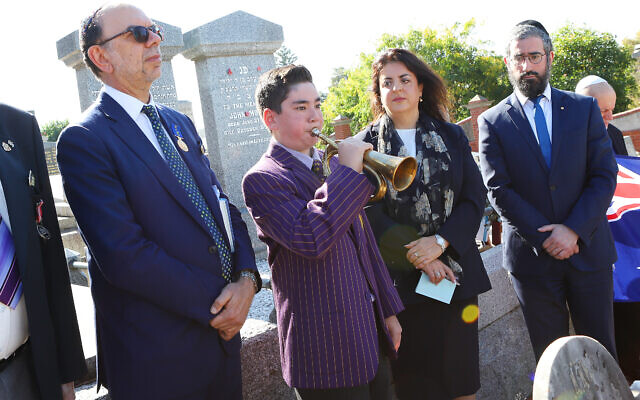 SHULES held commemorations on Anzac Day last Sunday to reflect on the sacrifice of Australians in wars and particularly to honour the memory of Jewish World War I commander, General Sir John Monash, a towering figure in early 20th century Australia.

Monash’s military prowess significantly accelerated the Allied war effort, and his contribution to Australian civilian life before and after the war profoundly changed Australian society.

At a service held by St Kilda Shule at the Monash gravesite in Brighton General Cemetery, senior ADF chaplain Rabbi Ralph Genende offered a reflection about Judaism’s values – and that the letters “CEO” – stand for compassion, courage, empathy and optimism.

These values, said Rabbi Genende, mitigate “the pity of war”, as expressed in the verse of World War I poet Wilfred Owen.

He concluded with the words of American poet Amanda Gorman: “Listen closely. Are you listening? There is no such thing as gentle war. There is no peace that can’t be flung aside. Our only enemy is that which would make us enemies to each other … Hate is a virus … To love just may be the fight of our lives.”

“Anzac Day is sacred to all Australians, but for St Kilda Shule it is especially soul-stirring, given the number of our shule’s members who served in the first and second world wars, 27 of whom tragically paid the ultimate price, along with so many other Australian soldiers. These men were sons, fathers and brothers – and their memory will be with us forever.

“Hakorat Hatov – expressing gratitude – is an important value within Judaism and we must express our deep gratitude for the sacrifices made by those who came before us and who enabled us to live the free lives we enjoy today.”

Attendees observed a minute’s silence and heard the recitation of the Ode by Marvin Bude, president of the Victorian Jewish Ex & Servicemen and Women of Australia (VAJEX), and a performance of the Last Post by Wesley College student Dylan Quick. St Kilda Shule congregant Graeme Lewis placed the Australian flag near Monash’s grave.

Caulfield Shule marked Anzac Day with a touching ceremony and breakfast in the Sukkiert Hall. More than 60 people joined the ceremony where they heard from Deputy Leader of the Victorian Liberal Party David Southwick, acting secretary of the Caulfield RSL Michael Raleigh, and VAJEX board member Dr Manny Kingsley.

Rabbi Genende also participated in a service at Elsternwick RSL earlier in the morning, which was attended by several hundred people.