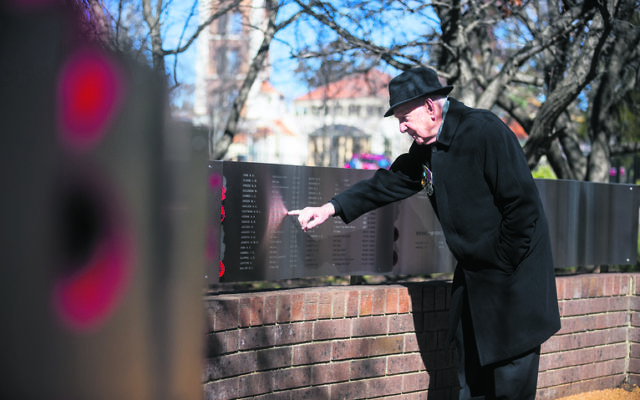 JEWISH history was made in our nation’s capital last Sunday when Governor-General Sir Peter Cosgrove officially unveiled the first ever Australian Jewish War Memorial (AJWM), which commemorates all 341 Jewish Diggers who are known to have died on active service for their country from 1900 to today.

It brought into reality a dream seeded in 1971 when the National Jewish Memorial Centre was established, and the timing could not have been more symbolic.

Barely a month after a statue honouring Australia’s greatest military commander General Sir John Monash was installed at the Australian War Memorial, August 12 was the day 100 years ago when Monash was knighted in the field by King George V following his masterminding of the pivotal Allied victory in the Battle of Hamel.

The auspicious ceremony and commemorative service – attended by more than 200 people including Chief of the Australian Defence Force General Angus Campbell – also included the presentation of a beautiful portrait of Monash by local artist Margaret Hadfield, which will hang in the National Jewish Memorial Centre.

The opening of the NJWM also marked the end of the four-year Centenary of Anzac Jewish Program (CoAJP) – a period which saw Mark Dapin’s landmark Australian Jewish military history book Jewish Anzacs published, the opening of the Anzac Museum in Beersheba, and the launch of the Sir John Monash Centre in Villers-Bretonneux.

Berowra MP Julian Leeser recited a moving message from Prime Minister Malcolm Turnbull – a statement of tribute to every Jewish Australian listed on the memorial who made the supreme sacrifice, from those who perished from the Boer and Great Wars through to Private Gregory Sher who was tragically killed in Afghanistan in 2009.

“It is out of a love of Australia that Jewish sons and daughters would place their lives in peril so that we all may live in peace and security … the memorial being dedicated today will ensure their sacrifice will never be forgotten,” Turnbull wrote.

Federal Labor MP and Shadow Attorney-General Mark Dreyfus attended on behalf of Opposition leader Bill Shorten, and reported to Parliament the following day how emotional it was to see the memorial being unveiled and witness “Governor-General Sir Peter Cosgrove speak movingly of the role of Jewish members in the defence force and the sacrifice that they have made next to their brothers and sisters of other faiths, in defence of our great country”.

Dreyfus also offered particular thanks to the work of the ACT Jewish Community’s leadership team in helping the memorial become a reality, and said in honouring the occasion of the centenary of General Sir John Monash’s knighthood, it was “timely to recognise the thousands of Jews who, though less known, have given the same service, risking their lives for their country”.

CoAJP national coordinator Peter Allen presented further research for the ceremony and its official program that shed light on the immense toll and burden the loss of life had on the Jewish community.

“It is estimated that approximately 10 per cent of the Jewish population of Australia in 1914-1918 enlisted – some 1800 men and women,” Allen said.

“Of the 341 Jewish men who died, there were 13 pairs of brothers – and 156 of the men share 48 surnames – their families enduring inconsolable grief.

“Their names are now side by side in one place at this memorial – zachor.”

Dr Keith Shilkin, president of the Federal Association of Jewish Ex Service Men & Women, said, “The memory of their loyalty, commitment and heroism is forever recorded here for all to see.”

Shilkin added that Monash’s own description of Jewish Australian soldiers’ contribution is particularly fitting. In 1919, Monash wrote: “It is a record which will enshrine, for the affectionate admiration of the coming generation, the memory of faithful and loyal service to country and cause, and of self-sacrifice in endurance, suffering and even death.”