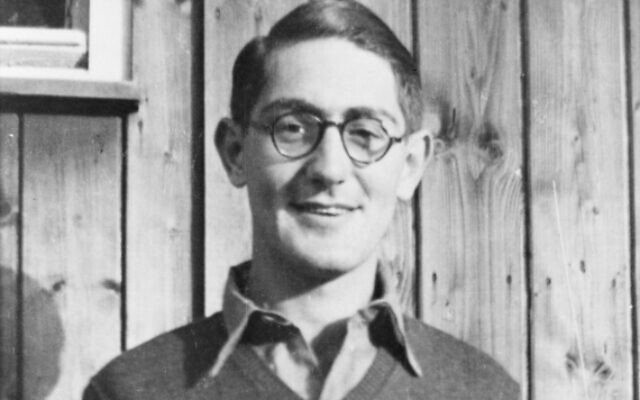 Private Lawrence Saywell in 1941 at a POW camp in Moosburg, Germany. Photo: AWM

PRIVATE Lawrence Phillip Saywell’s story is as remarkable and inspiring as it is tragic.

At 19, the Jewish Digger from Sydney was one of the first men to enlist in the Second Australian Imperial Force at the start of World War II.

Sadly, he was also the last Australian to die in the European theatre of war, suffering fatal gunshot wounds on what became known as Victory in Europe (VE) Day – May 8, 1945.

He is honoured each year by residents of the rural Czech town of Miretin at a memorial stone laid where he took his last breath, and was posthumously awarded two Czech military medals.

Peter Allen, who is researching and compiling detailed narratives for the more than 340 men named on the AJWM, said Saywell’s story “is so heartbreaking – it really takes your breath away”.

“So particularly this Anzac Day weekend – with Jewish commemorative services in Sydney and Melbourne cancelled – I hope we can all find a moment to quietly reflect upon Diggers like Saywell who made the ultimate sacrifice – far beyond anything we’re going through now with coronavirus.”

Saywell had his bar mitzvah at The Great Synagogue, and attended the NSW Board of Jewish Education’s 1938 winter ball.

While driving an army ambulance in Crete on June 5, 1941 during a massive German advance, he became one of many Australian soldiers taken prisoner.

After two unsuccessful escape attempts, he and three other inmates managed to flee from a POW camp in Pardubice in what is now the Czech Republic in January 1945. He then went into hiding with families in villages in the surrounding Bohemia hills.

Allen said there are various theories surrounding the exact circumstances of Saywell’s death, but what is known is he emerged on VE Day and encountered a confrontation near Miretin between a partisan group and a large number of captured German soldiers.

At some stage after offering his services to them as an interpreter, he was shot by an unknown, fleeing German soldier in a remote field. The next day, more than 500 villagers attended a commemoration service for him, including Czech soldiers who formed a guard of honour.

The AWM will pay tribute to Private Saywell in its Last Post ceremony on May 8. The ceremony will then be available to view at www.awm.gov.au.