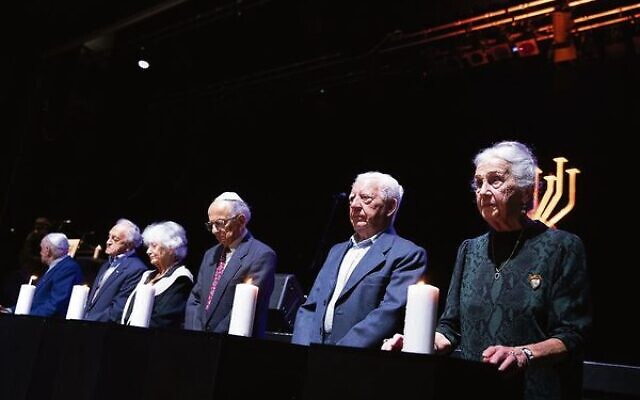 “PLEASE always remember, please do not ever forget.”

With those words, Holocaust survivor Olga Horak ended her keynote address at this year’s NSW Jewish Board of Deputies (JBD) Yom Hashoah commemoration.

Horak recounted her harrowing story of survival in front of almost 2000 guests, before she was joined by fellow survivors Jack Meister, Joe Symon, Ana and Gaby de Leon, and Sam Young to light candles.

Horak was 17 when she was transported to Auschwitz with her family. “Dr Joseph Mengele was in charge to select people from the human cargo arriving on a daily basis,” she said. “People looking fit were shown to the right side with the finger, on the left side were people taken to the gas chambers. I never saw my father again.

“My mother was shown to the right side, so was I. I was with my mum and that was the biggest moral support I had.”

Together they survived a death march to Bergen-Belsen, but tragically her mother died the day after it was liberated.

JBD CEO Darren Bark said, “Without these eyewitness accounts it is impossible to understand the brutality of the Shoah and what humanity is capable of.”

JBD president Lesli Berger added, “With each passing year, and as we mourn the loss of our dear Holocaust survivors, the importance of sharing stories of survival becomes the responsibility of us, those who have borne witness to their testimonies.

“The strength and determination required by survivors to share their oral testimony, re-living the horrors of their experiences over and over again, is unmatched.”

Youth HEAR also held a commemoration event for over 450 people, which ended with a clear call to action to commit to adopting our shared responsibility – to keep these stories alive.

“It was a true privilege to have a room full of leaders, community members, allies and Holocaust survivors standing beside us as we honoured the lives lost in the Shoah and learned from the stories that survived,” Youth HEAR co-founder and CEO Julia Sussman said.

The annual service at the Jewish Holocaust Memorial at Rookwood was attended by 150 people last Sunday. Rabbis Ben Elton and Menachem Feldman led the prayers, while Dane Stern, George Foster and Naomi Balkin were among the speakers.

Names of family members who perished in the Holocaust were read out.