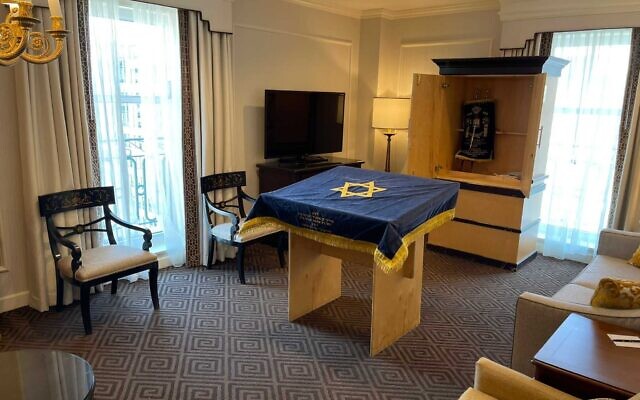 WHEN Israeli Prime Minister Naftali Bennett was held up in Washington, DC over Shabbat due to his meeting with US President Joe Biden being delayed, he faced a conundrum.

Confined to his hotel room due to COVID-19 isolation requirements, the religiously observant PM couldn’t go to shule.

So, shule was brought to him – with some help from the Israeli Embassy and Chabad, a hotel room was converted into a synagogue, complete with a Torah scroll and ark. Prayer books and yarmulkes were also provided for those who wished to davven.

Bennett was due to fly back to Israel after the Biden meeting scheduled for Thursday. But the Kabul terror attack meant the meeting was changed to Friday.

Meanwhile, fact checkers have debunked a claim – widely disseminated on social media, in the US and Israel, including by a Likud MK – that Biden fell asleep during the meeting.

Clips shared on social media showed the Commander-in-Chief appearing to fall asleep while Bennett was speaking. But Reuters said the clips were edited to cut out remarks Biden made immediately after he briefly lowered his eyes while listening.

Observers also noted that Biden’s remarks were a direct response to the Prime Minister’s comments.