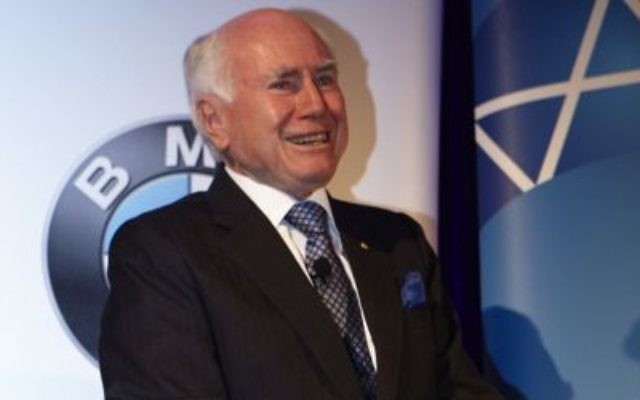 AS Australia swings into election mode, former prime minister John Howard has said his government would not have abstained from the United Nations’ vote on Palestinian statehood.

The erstwhile Liberal leader made the remarks exclusively to The AJN after addressing an Australia-Israel Chamber of Commerce lunch on Tuesday.

He said he disagreed “very strongly” with Labor’s decision to abstain from last November’s vote, which granted the Palestinians the status of a non-member observer state.

“If I’d still been prime minister we wouldn’t have [abstained], we’d have stuck with Israel on that,” he said.

“I don’t think the position we took was sensible because it did nothing to encourage an acceptance of Israel’s right to exist.”

His statement echoed current Opposition Leader Tony Abbott’s line at the time. Abbott said he “deplored” the position taken, adding support for observer status should have been ­“conditional on the Palestinians’ unconditional and unambiguous acceptance of Israel’s right to exist behind secure borders”.

Howard was also critical of Foreign Minister Bob Carr’s repeated assertion that all Israeli settlements are illegal. “I don’t think that those sort of remarks at the present time are all that helpful,” he said.

Addressing the lunch, Howard spoke at length about the critical election issues of the economy, climate change and border security.

“There is little doubt that the biggest single policy failure of the Labor Party in the last six years has been in the area of border protection. And the person most responsible for that is Mr Rudd,” he said.

“The most precious ingredient in politics in my view is consistency, which produces credibility. And he has no credibility, not a skerrick of credibility on the issue of asylum seekers.”

Howard also weighed in on the newly restarted peace talks between Israel and the Palestinian Authority, saying he was “confident but not hopeful” of a settlement.

“On both sides you’ve got good people – Tzipi Livni from Israel and Saeb Erekat from the Palestinian Authority,” he said.

“But the reason why I’m hopeful rather than confident is that twice in the last 10 years or more the Israelis have offered 95 per cent of what the Palestinians have wanted and still been knocked back.”