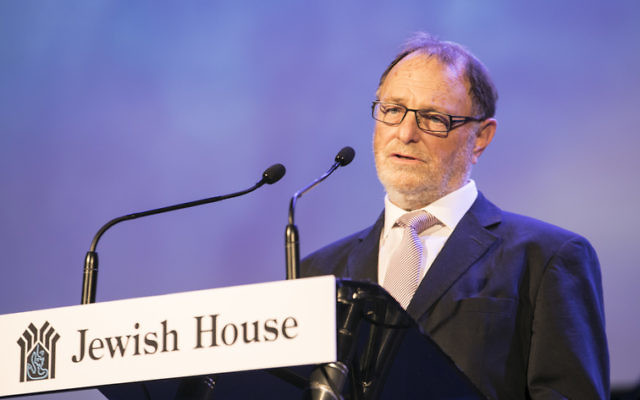 The doctor revealed that when he was approached to receive the award, he didn’t know what a humanitarian was.

“Then it occurred to me that the true humanitarian I have encountered who has inspired my whole family was my mother Magda.

“She did so much voluntary work and charity work unrecognised and I dedicate this award in her memory.”
Moss was a young boy, living with his mother, grandmother and aunt, when he was protected by Raoul Wallenberg in Budapest during the Holocaust.

“He has taken particular interest in helping the youth – those who have been abused, discarded, delinquent, dropped out of school on drugs, those with mental health difficulties and street kids with problems,” Clifford said.

“Tom has given unwavering support and improved their quality of life.

“He has made himself available any time of day or night going above and beyond without wanting any recognition.”

Following the presentation of the award, Berejiklian said that it was humbling to be at an event with so many people that care about an institution that is “compassionate, caring, non-judgemental and professional”.

She said, “In the last 12 months, 700 individuals or families have received housing, 6500 have received assistance and 1500 crisis calls were made by Jewish House.”

Berejiklian said a government and society is judged by how it treats the most vulnerable in the community.

“Jewish House exists to support those who need support at the lowest point in their lives.

“NSW is a stronger and better place because of Jewish House.”

Prime Minister Malcolm Turnbull said in a statement last week on White Ribbon Day that Jewish House provides “vital domestic violence support services” and that he is “very supporting of the work” they are doing for the community.

The funding provided to Jewish House will assist in upgrading security systems ensuring a more secure location for crisis accommodation.