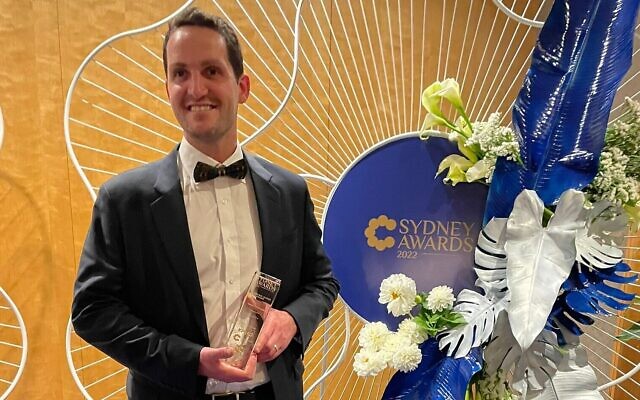 THE Jewish founders of ticketing platform Humanitix were recently recognised as emerging leaders after they received a Committee for Sydney award.

School friends Adam McCurdie and Josh Ross, who attended Masada College in Sydney, formed Humanitix at the start of 2016 and have rapidly expanded into New Zealand and the US.

The social enterprise donates 100 per cent of its booking fees to children’s charities and McCurdie told The AJN it’s an “honour” to be recognised for something as unique as Humanitix.

“It’s very special because we started Humanitix in Sydney, grew up in Sydney and are now headquartered in Sydney as we’ve expanded globally,” McCurdie said.

“It’s really beautiful to be recognised by Sydney.”

McCurdie said Humanitix began as an experiment into how business could contribute to society through more than just its products and services, but by redistributing its profits to the most affected children’s charities.

“Ticketing platforms charge booking fees, everybody hates booking fees and they add up to billions of dollars every year,” McCurdie said.

“This is the first ticketing platform where all the profits from booking fees – 100 per cent – are donated to the most affected children’s charities we can find. We’re transforming all these previously resented fees into millions, and hopefully soon to be billions, of dollars in annual funding to things that matter.”

Ross said Humanitix is “the first of its kind social enterprise disrupting a global industry notorious for taking advantage of people, and we’re flipping that on its head with a social enterprise model that gives back to community”.

McCurdie said he’s humbled to see how many events are now moving their ticketing over to Humanitix, knowing the simple change can make such a big difference.

“It’s been amazing to see hosts of all shapes and sizes choose to switch their ticketing to Humanitix – everyone from a small 10-person meditation retreat, all the way up to tens of thousands of people at a music festival,” McCurdie said.

“The world of events is now choosing to switch to Humanitix and it’s very humbling, because they’re choosing to go with the more impactful ticketing provider. Just making a choice in their ticketing provider can make a huge impact on the world and that’s where I think models like Humanitix are very exciting, because it takes something that’s otherwise very transactional and turns it into something that’s transformational.”