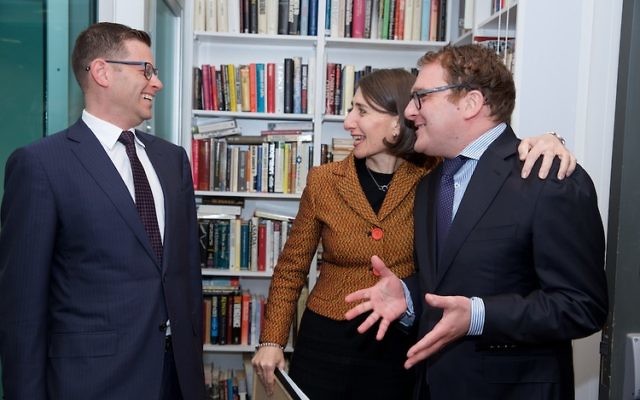 Spinak, who had twins with his wife Rhiannon last year, was recently diagnosed with an incurable rare form of cancer.

There wasn’t a dry eye in the room as Spinak addressed the community before stepping down as JBOD president after four years at the helm. “At this stage there is no cure,” he said of his condition. “But there is also no sample size and I am no statistic.”

He added, “I don’t think I understood the special nature of our community as I have come to understand it over the last few weeks.”

He is staying positive, and said that he plans to be at the JBOD’s 100th anniversary in 2045, but is also preparing for all eventualities.

“Many of you have asked what you can do for me,” Spinak said.

“If you really want to know, at all times, no matter what happens, when you bump into my children, Grace and Michael, in the future bore them with your recollections of me and bore them with stories of just how fantastic I was.

“Tell them your memories and please give them a sense of what it was like working with their dad.”

Spinak was honoured by the Premier and Opposition Leader Luke Foley.

Berejiklian paid tribute to Spinak as “an amazing and remarkable human being” and gave him a special commendation for his work for NSW.

She said that he dedicated himself to JBOD, the people of NSW and demonstrated what true community leadership is about.

“Words cannot express how we feel about Jeremy personally.

“On behalf of the people of NSW I want to present you with a special commendation for outstanding contribution to building a safer and socially harmonious community in NSW.

“Very few human beings or community leaders make a difference to NSW, and Jeremy is one of those.”

“I can say that without a shadow of a doubt that you have built so many friendships that will endure on the Labor side of politics,” Foley said.

“On so many issues we have formed common causes … you have ensured balance and fairness when it comes to the Labor party’s treatment of Israel.

“You have been of such assistance during all of those debates.”