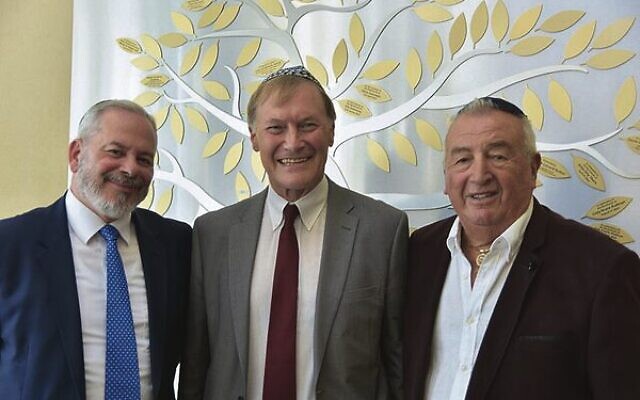 THE British MP who was stabbed to death earlier this month demonstrated his admiration and appreciation of the Jewish community earlier this year, when he spoke of how proud he would have been to be born Jewish.

Sir David Amess made the remark during a House of Commons debate to mark Holocaust Memorial Day in January.

“Although I myself am not a Jew but a Catholic, there is Jewish blood in each and every one of us,” the 69-year-old said.

“I would certainly have been proud to have been born a Jew, and I stand shoulder to shoulder with our local Jewish community.”

He continued, “I simply do not understand and have never understood antisemitism.

“The most important lesson from the Holocaust is that although we cannot police the world, it is simply not acceptable to stand by and do and say nothing when genocide happens.”

A staunch advocate of Holocaust education, during his parliamentary career, Amess campaigned for a statue of Holocaust hero Raoul Wallenberg to honour his work saving thousands of Jews.

The memorial was eventually installed outside Western Marble Arch Synagogue, with Amess recalling, “It was one of the proudest moments of my life when in 1997 Her Majesty the Queen, the Duke of Edinburgh and the president of Israel unveiled that statue.”

A 25-year-old man has been arrested on suspicion of Amess’s murder, with police saying they’re treating this death as a terrorist incident, potentially linked to “Islamist extremism”.

Tributes have poured in from across the British Jewish community for the Southend West MP.

Marie van der Zyl, president of the Board of Deputies of British Jews, said the organisation was “devastated” by the news.

“Such violence is an intolerable affront to our democracy and must be met with the full force of the law. We will never forget Sir David’s long and deep friendship to our community. Our hearts go out in profound sorrow to his wife Julia and five children.”

The All Party Parliamentary Group Against Antisemitism hailed him as “a long-standing and active member” of the group, while Conservative Friends of Israel called him “a great friend of Israel”, noting he served as their parliamentary officer in the 1990s.

The Holocaust Educational Trust’s chief executive, Karen Pollock recalled a “long time supporter … joining us at every gathering, and encouraging us in everything we did”.

Rabbi Geoffrey Hyman of Southend Shule described Sir David as “a real mensch” who had “a very close relationship with our Jewish community”.

“Always supportive and sympathetic to our members and causes, he attended numerous events at our synagogue. We are deeply saddened and send our condolences to his dear family.”