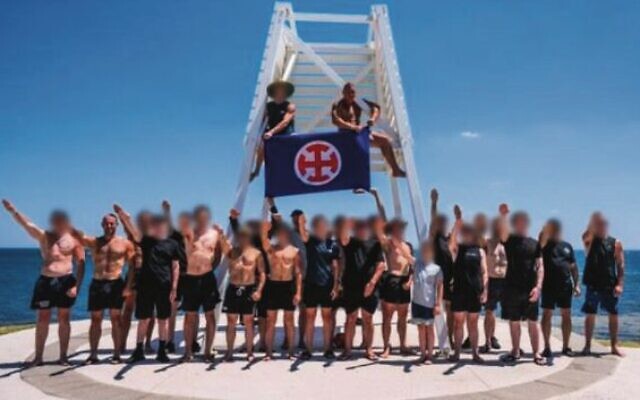 An image of the group at the Point Ormond lookout.

The Jewish Community Council of Victoria (JCCV) has condemned a gathering of neo-Nazis at Elwood Beach, photos of which emerged on social media over the weekend.

The group – which gathered at the Point Ormond lookout and performed Hitler salutes – were allegedly members of the European Australia Movement, founded by neo-Nazi white supremacist Thomas Sewell.

Elwood has a sizeable Jewish community.

“It is a sad reality that there seems to be a small group of Victorians who feel the need to use the summer holidays to scare or intimidate the Jewish community,” JCCV president Daniel Aghion said.

“The ideology that this pathetic group represents is one of bigotry and violence. The Victorian Jewish community will not be cowered by these public displays of hate.”

He urged anyone who witnessed similar “hateful incidents” to report them to the Community Security Group on 1300 000 274.

Macnamara MP Josh Burns said the behaviour “goes against everything this [Elwood] community stands for”.

“We can’t be silent and let this happen without calling it out for what it is – it is racism, it is divisive,” he said.

“And it is frankly not welcome here.”

Anti-Defamation Commission (ADC) chairman Dvir Abramovich said, “It is unacceptable that bigots, with burning malice in their hearts, are brazenly sowing fear and intimidation on our beaches and streets.”

The ADC also obtained photos this week of white supremacist flyers posted on street poles in Beaconsfield with the message “white revolution is the only solution”, and racist material letterbox-dropped in that suburb by the European Australian Movement.

“Our mission is simple; the preservation and advancement of white people in Australia,” the flyers said.

Meanwhile, Sewell narrowly avoided a prison sentence at Melbourne Magistrates Court on January 12 in relation to his assault of a black Nine Network security guard last year, instead receiving a 150-hour community service order, and recorded convictions of affray and recklessly causing injury.

Magistrate Stephen Ballek said, “The offending was sickening to watch on video,” adding Sewell would have been sent to prison if not for his lack of criminal history.

Sewell said the attack had nothing to do with race, and also claimed he acted in self-defence – a claim rejected by the court.

Outside court, Sewell made what appeared to be a Nazi salute.

Abramovich told The AJN after the ruling, “There would be many asking themselves whether a community order sends a powerful enough message that those who commit crimes of racial violence will face severe consequences.”