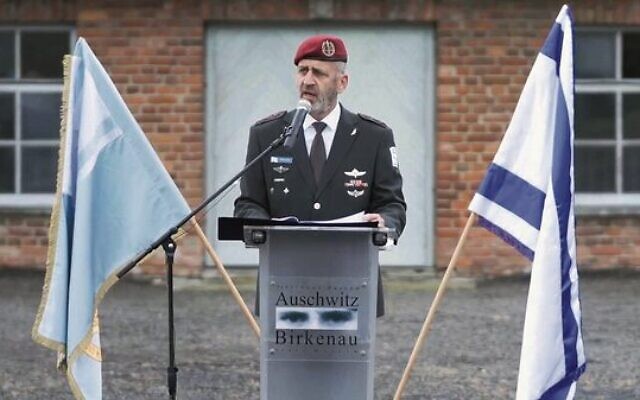 Speaking at the Auschwitz death camp, Israel Defence Forces Chief of Staff Aviv Kohavi on Monday slammed Iranian President Ebrahim Raisi for expressing doubt about the Holocaust, saying that was one of the main reasons Tehran could not be trusted with nuclear weapons.

“You don’t have to be a historian or a researcher to understand the horrors of the Holocaust – you have to be a human being,” Kohavi said. “Anyone who distorts and denies the painful and solid truth of history lies easily today and will naturally lie in the future.”

“This is another reminder that such people should not be allowed to possess any capacity of any kind to develop weapons of mass destruction,” Kohavi added, referring to Iran’s nuclear program.

Israel has for decades vowed to stop Iran – which regularly calls for the destruction of the Jewish state – from acquiring nuclear weapons and has opposed the return of the US to the nuclear deal with Iran, arguing that it does not go far enough in curbing Tehran’s nuclear ambitions.

Nazi German forces killed an estimated 1.1 million people, the majority of them Jews, at the Auschwitz-Birkenau complex, the site of Kohavi’s remarks.

The military chief was one of several Israeli leaders who expressed outrage after Raisi’s controversial comments in a 60 Minutes interview aired on Sunday, during which he was asked, “Do you believe the Holocaust happened? That six million Jews were slaughtered?”

The Iranian president responded, “Historical events should be investigated by researchers and historians. There are some signs that it happened. If so, they should allow it to be investigated and researched.”

Prime Minister Yair Lapid took to Twitter to hit back at Raisi’s comments, posting four graphic photos from the Holocaust, with the caption, “Some signs.”

President Isaac Herzog responded to his Iranian counterpart by tweeting a photograph he said he keeps on his desk of Holocaust survivor Dora Dreiblatt Eisenberg’s forearm, tattooed with her prisoner identification number.

Dreiblatt Eisenberg’s arm is shown being held by that of her infant great-grand-daughter, Daniella Har-Tzvi, against a background of the Israeli national flag.

Alongside the image, Herzog wrote, “Mr Raisi, on my desk in Jerusalem there is one photograph. The numbers speak for themselves.”

Deborah Lipstadt, US Special Envoy to Monitor and Combat Antisemitism, labelled the remarks “ludicrous” and “dangerous”, adding, “His statement is a form of Holocaust denial and a form of antisemitism.”

Raisi will be speaking at the 77th session of the UN General Assembly later this week, his first appearance at the annual gathering of world leaders.

“The UN will reach a new low if they give the Butcher of Tehran a platform,” he said, referring to Raisi’s past authorisation of thousands of executions of political dissidents when he headed the judiciary.

Raisi, an ultraconservative cleric known for his hostility to the West, became president last year.

Its leaders have called for Israel to be wiped off the map and previously made statements that distort the history of the genocide that killed six million Jews or deny its existence.

Meanwhile, France’s Foreign Minister has urged Iran to take the last offer on the table to revive the 2015 nuclear deal with the United States and key powers, saying the window of opportunity “is ready to close”.

Foreign Minister Catherine Colonna did not rule out that French President Emmanuel Macron would meet his counterpart Ebrahim Raisi on the sidelines of the UN General Assembly.

“We’ll see what this week brings,” she told reporters. “The window of opportunity seems ready to close again.”

“We are repeatedly saying … There is no better offer for Iran,” she said. “It’s up to them to make a decision.”

Raisi told 60 Minutes that he was open to a “good” deal but pressed for guarantees from President Joe Biden that the United States would not again leave the accord under a future leader – a promise that the US administration considers impossible.

Former president Donald Trump pulled out of the 2015 deal.