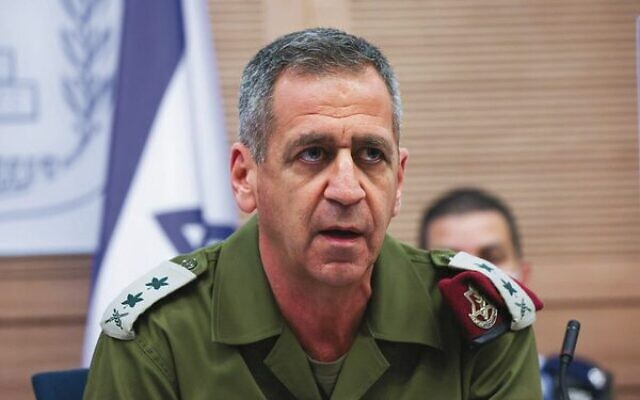 ISRAELI security chiefs have ramped up their rhetoric against Iran, with the head of the Israel Defence Forces warning that the military was beefing up its preparations for a possible attack on Iranian nuclear facilities.

Defence Minister Benny Gantz said Israel will carry out operations that “haven’t been seen in the past” if regional war breaks out.

IDF Chief of Staff Aviv Kohavi told the Knesset’s Foreign Affairs and Defence Committee that the army “is accelerating operational planning and preparedness to deal with Iran and the military nuclear threat”.

“Thankfully, the budget that was approved [last week] makes it possible to contend with a variety of threats,” he said.

His comments came as the Israeli Air Force is expected to resume training for a strike on Iran’s nuclear program.

In January, Kohavi announced he had instructed the military to begin drawing up fresh attack plans for a strike on Iran’s nuclear facilities, and last month the government reportedly allocated billions of shekels toward making those plans viable.

In his remarks to the committee, Kohavi also told Knesset members that Israel faces “many security challenges” on numerous fronts.

“In the past year we’ve continued to act against our enemies in missions and secret operations throughout the entire Middle East. The IDF will continue to act to remove threats and will respond forcefully to any violation of [Israeli] sovereignty, in Gaza or in the north,” he said.

Meanwhile, Gantz last week inaugurated a new factory opened by Israeli weapons-maker Rafael in the northern town of Shlomi, vowing that Israel will not allow advanced weaponry to reach Iran’s regional proxies, amid a recent uptick in airstrikes in Syria that have been attributed to Israel.

“Fifteen years ago, this place burned from Hezbollah rockets and the threat from Iranian [military] entrenchment in Syria,” he said.

Gantz touted the factory’s opening as a “clear symbol to our enemies that our determination cannot be undermined”.

“On an operational level, we are acting extensively,” he said. “We won’t allow Hezbollah and other Iranian proxies in the area to be equipped with weaponry that will harm Israel’s [military] superiority in the region.”

Gantz added that Israel was simultaneously “working continuously to prevent war”, but if one breaks out, “We will be prepared to carry out operations that we haven’t seen in the past, with means we didn’t have in the past, that will hit the heart of terror [entities] and their capabilities.”

In recent months, Iran has dragged its feet on returning to indirect negotiations with the United States about a mutual return to the 2015 nuclear deal, which then-US president Donald Trump abrogated in 2018 and Iran abandoned a year later.

Last week, Iranian officials said they planned to return to the talks by the end of November, but US President Joe Biden’s administration has expressed growing impatience and threatened to explore “other options” should the negotiations fail.