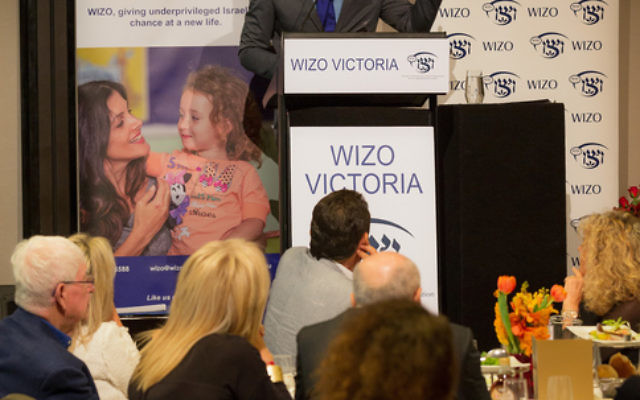 THE story of Maria Altmann is best known from the film Woman in Gold. Portrayed by Helen Mirren, Altmann is celebrated for her lengthy legal campaign to reclaim the five family-owned paintings by artist Gustav Klimt stolen by the Nazis during World War II.

But the true and charismatic character of Altmann was further illuminated by her former caregiver Gregor Collins on Sunday. Visiting from the US, hes addressed more than 250 guests at the WIZO brunch held at the Crown River Room.

Collins described the special bond that blossomed between he, “a 32-year-old gentile actor from Virginia”, and Altmann, “a 92 year old Jewish refugee from Austria”.

Collin’s friend had answered an advert to be Altmann’s caregiver, but when it was decided she would require two people, Collins was called upon.

“This job was way beneath me. I came to Hollywood to be an actor, not a caregiver,” he said recalling his initial reaction.

“But let’s be honest, I was a starving artist, and a few extra bucks wouldn’t hurt.”

After a 45-minute tea with Altmann, he took the job for one reason: “This woman opened up her mouth and it was like a relic from a forgotten world. She was like a human songbird. It was like an impossibly enchanting cross between Julia Childs and Mary Poppins.”

“It was truly love at first sentence,” he added.

Remembering the three years he spent with Altmann until she passed in 2011 at the age of 94, Collins shared, “I had a very old soul, and she had a very young soul, and we delightfully met in the middle. And so, what brought us together most immediately was her sense of humour.”

He has since released his memoir, The Accidental Caregiver: How I Met, Loved and Lost Legendary Holocaust Refugee Maria Altmann.

While there seems no obvious link between Collins’ book and the work of WIZO, he told The AJN, “When I think of the five founding members of WIZO, and how most of them came from wealth and were living a pretty comfortable life, it’s incredible how they chose to give that up to be in service to thousands of Jewish women and children around the world. I can’t help but think that Maria would have fitted in well with these industrious ladies.

“Like them, she was cultured and educated, came from extreme wealth, yet was an ardent altruist who spent her entire life caring for others. It was one of the pleasures of my life to be able to return her the favour.”