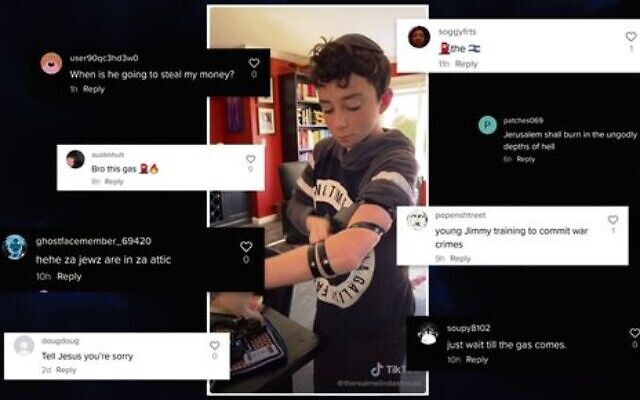 Some of the antisemitic comments on the TikTok video of Izzy putting on tefillin. Montage: Grace Yagel

“WHY does everybody hate us?” My son Izzy asked me this question after a man with a machete attacked Jews at a Chanukah party in New York in 2019. Izzy was 12 years old when he flopped onto the couch, kicked up his feet and asked the question no Jewish parent wants to hear.

I spoke to him about the history of antisemitism, how it’s always irrational, and how when we’re hurt for being Jewish, we need to be even more outspoken in our Judaism. That to really be a “Bear Jew” – like the Nazi-hunting character in the revenge fantasy Inglourious Basterds – we stand up and fight back with pride. As Elsa says to Jojo in Jojo Rabbit, “There are no weak Jews. I am descended from those who wrestle angels and kill giants. We were chosen by God.”

So when the antisemitic comments started to pour in after a TikTok video of Izzy laying tefillin went viral last month, he was somewhat prepared and, sadly, unsurprised.

A few weeks ago, we went to New York and stayed with my sister Melinda Strauss, who shares videos about Jewish life and kosher food with over 420,000 followers on her account My Orthodox Jewish Life. Some of her followers had asked to see a video of someone putting on tefillin. When she saw Izzy about to daven, she asked if she could film him as he wrapped the tefillin around his head and arm.

Izzy and his aunt joked all the time about her TikTok and how if he ever stayed at her house, he’d want to be featured, so he gladly obliged. At first, the comments were a combination of sweet and curious. Some people thanked her for sharing the beauty of her faith, and some wanted to learn more about tefillin. A week or two went by.

And then Izzy wandered into the living room with a half-smile on his face. “Mom, I’m famous,” he quipped. He told me there were over three million views and he’d scrolled through over 2000 comments and found … lots of antisemitism. He sat down next to me. I opened the app and looked through it with him, mocking the really dark comments that included: “That’s it! To the gas chamber.” “Should of died in the gas chamber.” “Gas them allllllll.” “Yo! Hitler is behind you.” “I snitched on u to the Germans.” “Zey are in ze attic.”

We also made jokes about the Jesus-specific comments that included: “Does he have to wear that to apologise for killing Jesus?” “Repent and believe in Jesus Christ!” “When do y’all crucify Jesus? Ah. Wait. Y’all already did that.”

Izzy’s sense of humour is perfectly suited to this classic Jewish coping mechanism of mocking antisemitic accusations. I recently read Sholom Aleichem’s The Bloody Hoax, and laughed with recognition at the description of Jews coping with a blood libel accusation by having faux-Talmudic debates about the halachah of slaughtering Christian children to use their blood for matzah. (Halachah does not deal with this issue because it is not part of Judaism, despite what antisemites throughout history have said.) It is almost a rite of passage to be welcomed into this centuries-old tradition of using humour to respond to the irrational accusations the world throws our way.

The comments included plenty of cracks accusing Izzy of being brainwashed, and those were the ones that bothered him the most. Because while he’s used to hatred against Jews, he can’t understand why anyone would think it’s wrong for a Jewish kid to be brought up keeping Jewish practices. “I’m not indoctrinated. I’m Jewish,” he said with frustration.

I’m kvelling with pride. But I’m also angry. Izzy doesn’t feel unsafe or shaken in his Jewish identity. He knows his parents have his back, that we keep him physically safe and protected. And he isn’t surprised that there is antisemitism, not even at 14.

I am angry that TikTok allows antisemitism to thrive in videos and comments, and rarely takes down reported videos – with notable exceptions being videos created by Jews that were bombarded with false reporting from antisemites. Melinda’s account has been suspended on multiple occasions for videos about Shabbat and keeping kosher.

I am angry I have to help my children develop their coping mechanisms. I am angry that even though we managed to report and successfully remove a couple of the most vile comments, more have replaced them. The TikTok now has more than eight million views and over 13,000 comments.

And yet I cling to a tiny glimmer of hope, thanks to the non-Jews in the replies defending Jews and defending Izzy. And to Bear Jews everywhere, laying tefillin every morning and refusing to cower.