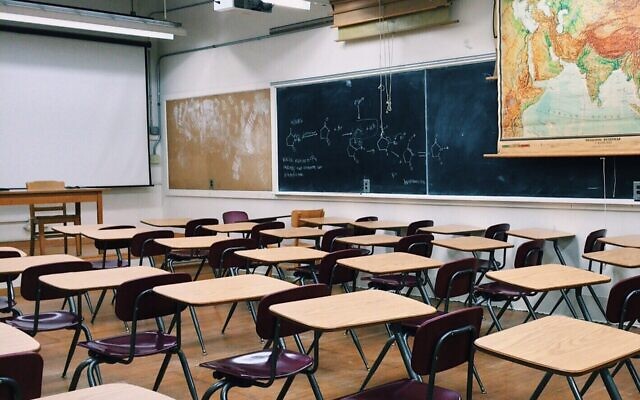 THE ongoing importance of recognising warning signs of antisemitism were highlighted with heart-wrenching recent examples, and moving tributes and prayers, at a Kristallnacht commemoration service at the Sydney Jewish Museum earlier this month, attended by more than 350 people.

Vic Alhadeff – CEO of the NSW Jewish Board of Deputies (JBOD) which presented the event – revealed that only days before he’d received an email from a year 9 Jewish student, who wrote about “experiencing dozens of counts of antisemitism” in class.

The letter also revealed a “most harmful” class debate, where students were asked to argue for or against the topic “Were Nazis responsible for killing six million Jews?” After the lesson, the teacher is claimed to have said she “agreed with both sides”.

JBOD is addressing this, and several other recently reported incidents, but Alhadeff said the important thing to recognise is that such cases “do not happen in a vacuum – they are part of a process”.

“There is a need for leadership – at the dinner table, in the classroom, the pulpit, the parliament, and the media – to condemn such conduct and to call out bigotry,” Alhadeff said.

“The alternative imperils all of us.” 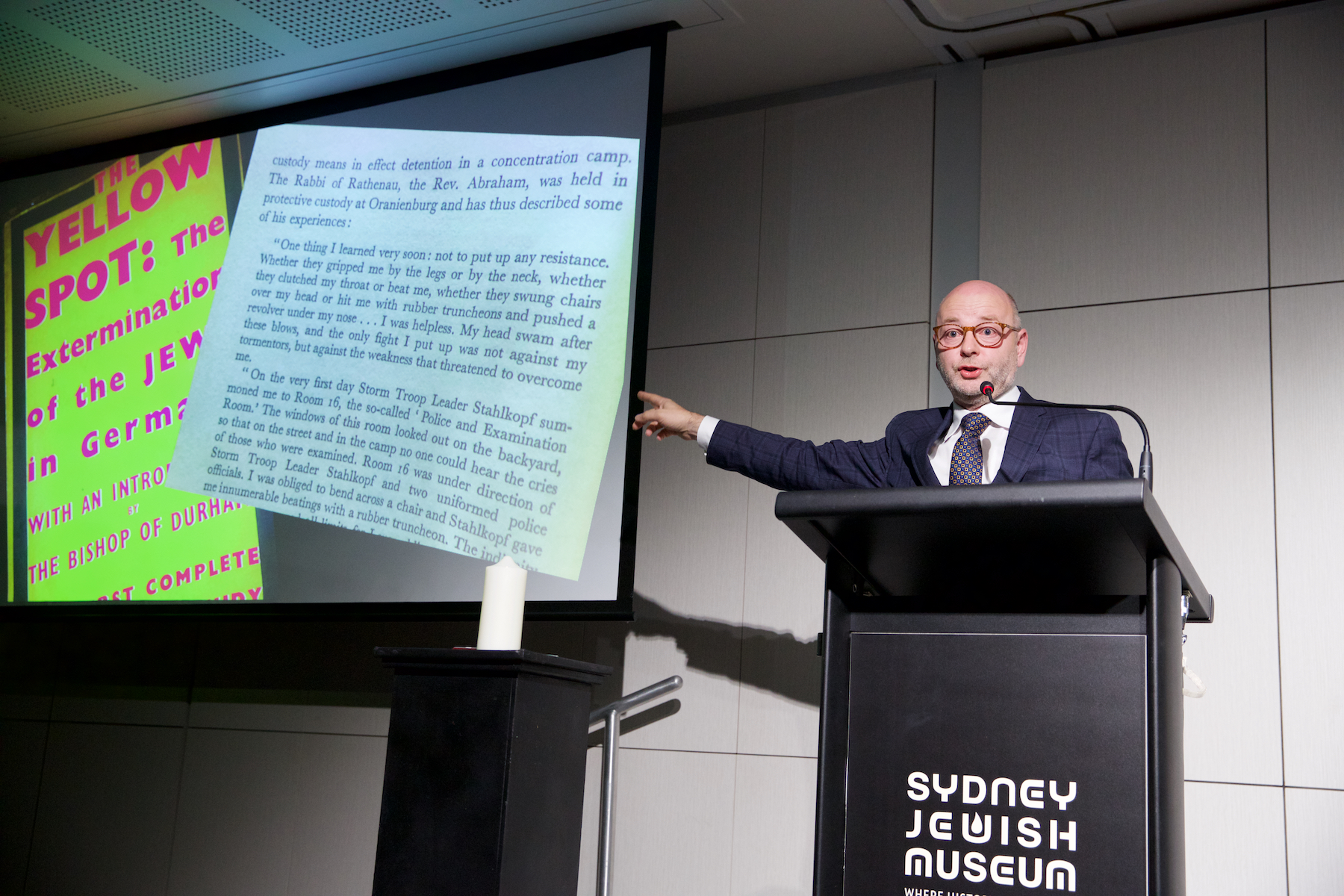 The keynote speaker was Dr Stephen Smith, CEO of the University of Southern California Shoah Foundation, which was established by Stephen Spielberg, and has so far filmed 55,000 testimonies of survivors of the Holocaust and other genocides around the world.

You could hear a pin drop during parts of his presentation, when he showed recorded interviews with Shoah survivors such as Australian Eva Slonim, and testimonies by witnesses of the Armenian and Rwandan genocides.

Smith reflected that in all the testimonies he has reviewed, “I’ve heard anger, bitterness, trauma – but never hatred or revenge …

“The testimonies in this wonderful museum are the stories of resilience – and the courage that you have to tell them allows us the opportunity to be courageous ourselves,” Smith said.

At least 91 Jews were murdered and thousands of Jewish properties, including 267 synagogues, were destroyed, predominantly across Germany and Austria in the Kristallnacht pogroms of November 9 and 10, 1938. 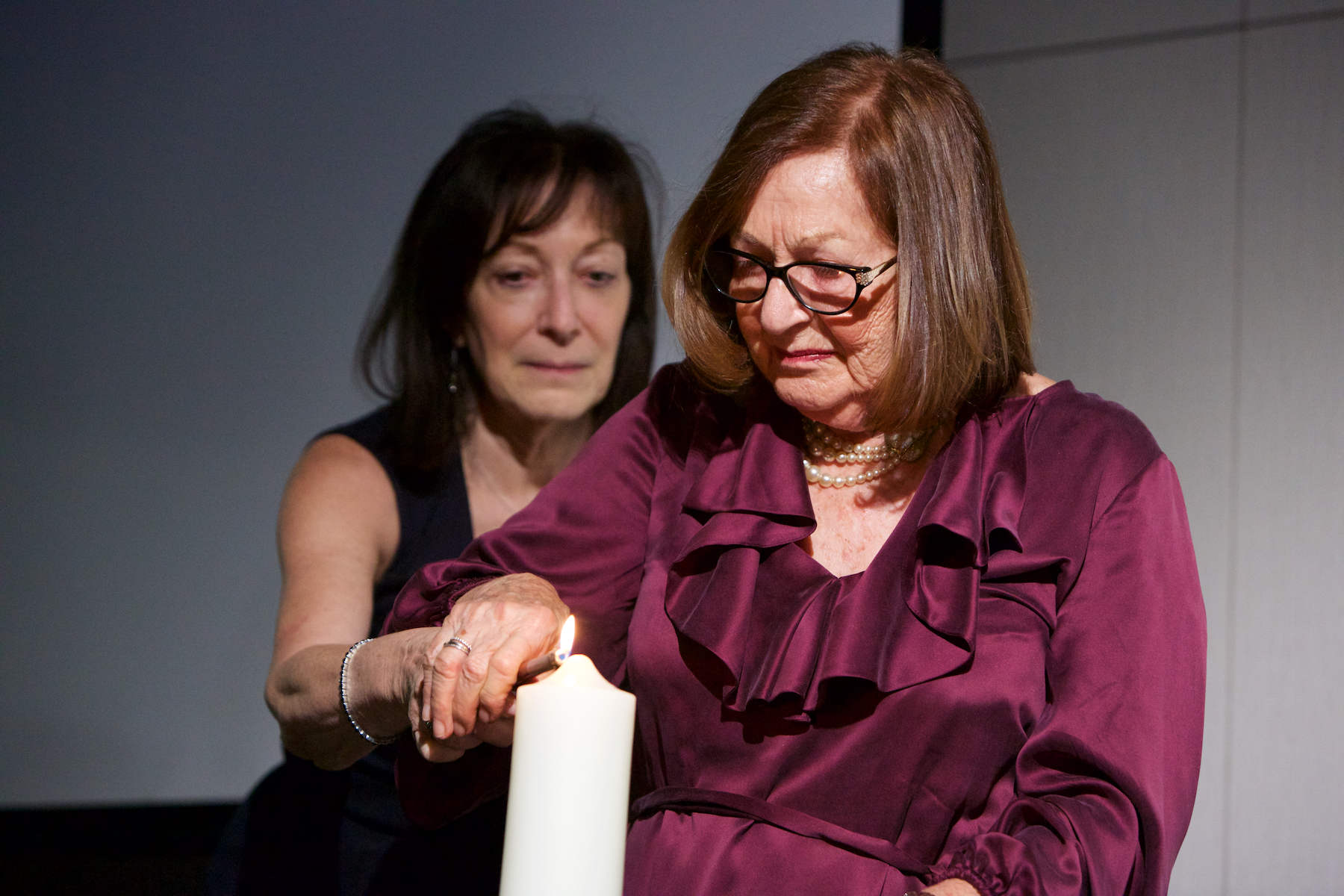 Ruth Rack lights a memorial candle with the assistance of Aviva Wolff from the Sydney Jewish Museum. Photo: Giselle Haber

The commemorative service concluded with Next Gen member Zehava Heinrich paying tribute to her great-grandparents who survived the Holocaust but who experienced unimaginable trauma during Kristallnacht.

Ruth Rack, 91 – who experienced Kristallnacht as a 10-year-old in Leipzig – lit a memorial candle in honour of her parents and other relatives murdered during the Shoah.