In 1931, a shoemaker arrived in Sydney and set up shop in Paddington. When he noticed a little dancer struggling to get up on pointe, he promised that he would make her better shoes so she could dance like a ballerina. True to his word, that’s exactly what he did, and that’s exactly what she did – getting up on pointe with her brand-new ballet shoes.

Within a few years of his arrival in Australia, Jacob Bloch made a name for himself in the Sydney dance scene.

Judy Wilkenfeld, Jacob’s grand-daughter, who has traced the family’s shoemaking roots back to the 1770s and found an incredible video of the family creating shoes in their factory in the 1940s, explained to The AJN that the family settled in Australia when escaping the antisemitism sweeping through Europe in the 1930s. As Judy explained, his Australian immigration papers arrived first.

It was Jacob’s love of dance and of the arts that drew him to ballet shoes. According to Judy, he was a brilliant dancer. “He was very theatrical, he loved the stage,” she said. “He always played the lead roles, loved the traditional Russian dancing. So when he came to Australia, he joined the Russian club and made connections that way.”

It is perhaps how Bloch became synonymous with some of the best and biggest ballet companies around the world, including the Royal Ballet, the American Ballet Theatre, the Bolshoi Ballet and the Australian Ballet. 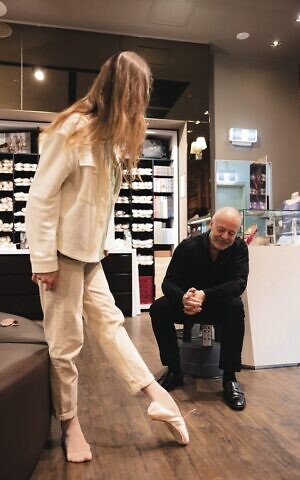 It was Jacob’s daughter, Betty, who decided he had to make some changes.

“Although my married name is Betty Wilkenfeld, I was known for ‘Betty Bloch’ for a long time,” she explained in a video screened at the company’s recent 90th birthday celebrations.

“Early on in the business, the shoes were only one width. So, first of all, I told my father that you have to make a, b, c and so then dad had to invest in a, b and c for ballet shoes and for pointe shoes,” she continued. “The other important thing, the light pointe shoe came in as a necessity, because with the modern teachers, as they developed and teachers coming from overseas, the shoes had to be lighter, and the dancers had to learn to pull up the weight off their feet. So, I said to my father, you’ve got to make a lighter shoe.”

Betty also explained that ballet dancers would pull their pointe shoes to pieces to make them more comfortable to wear. She suggested to her father that the company makes a pointe shoe without an arch so dancers could simply slip them on and dance. So, they did. And it’s believed that Bloch was the first company in the world to offer a demi-pointe shoe.

In time, Betty’s husband Gershon would also enter the business, bringing order and organisation with him, and soon after, the third generation entered the scene – with sons David and Simon joining the business and Judy floating in and out alongside her own commitments.

“I think the creativity came when David came into the business,” Betty said, before going on to explain that following his university degree in the US, David decided he was going to come back to Australia to make the best ballet shoes in the world.

And it is true artisanship, passed down from generation to generation.

A ballet shoe is not just a shoe – it is a way for a dancer to creatively express themselves, and the Bloch family have always taken that responsibility to heart.

It’s something that David Wilkenfeld is proud to have inherited, saying when he saw footage of his grandfather and uncles working in the Bloch factory, he realised what an honour it is.

“Seeing my grandfather working like that, which is the first time I’ve ever seen him working, sort of made me realise where this love of creation, zoned in from. And, you know, I realised it’s actually a genetic gift,” he said.

Jacob would make one pair of shoes for one customer at a time, just like he did for that little girl all those years ago. While the manufacturing has changed slightly, the family still continue to prioritise personal service, listening and learning from dancers and dance teachers to create the perfect fit for each dancer, every time. In fact, it’s what David enjoys most. It was Kelvin Coe, the first male artist to be promoted to principal dancer of the Australian Ballet, who informed him that sometimes, the shoes weren’t all that comfortable for men.

“The first thing he said to me was that men spend most of their time, as opposed to women, up on relevé, so they can feel the lump under their metatarsal,” David explained. So, he designed a shoe to fix the problem. “We learn from working with the professionals.”

It’s something that Betty acknowledged as well, explaining that she learnt to fit pointe shoes purely by watching, listening and talking to the dancers and teachers.

“They would come in and sit down and talk and it became a little bit of a social place for dancers and teachers, and we got to know them that well almost like a family,” she recalled.

The family, particularly David, have invented several other innovations like split jazz shoes and more recently, studio shoes designed for Pilates, barre and yoga. Importantly though, they have never lost sight of the dancer.

“When we fitted the shoes, we just didn’t fit anything. We did our best to give what was right for the customer and not for the sake of the sale,” Betty said in the video.