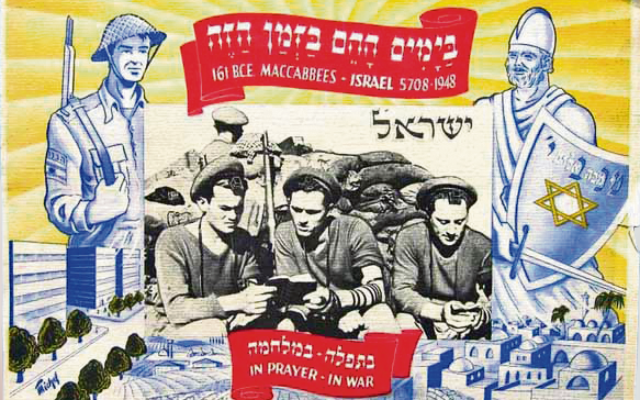 Albeit that COVID has restricted some of the public Chanukah celebrations we had come to take for granted, Chanukah this year will once again be a time of celebration, with gastronomic treats as well as some historic reflection on Jewish survival.

Already many decades ago it was celebrated here in Australia in a traditional manner. Reference to the Jewish press of earlier years reveals advertisements for Chanukiot  – Menorot – and celebrations including Chanukah balls, children’s parties etc.

It is however instrumental to cast our minds back to Chanukah in that most tumultuous of decades, the 1940s. For it was then that the message of the few prevailing over the mighty gained particular resonance.

In the December 26, 1940, entry to his diary that survived the Shoah,  Chaim Kaplan (Scroll of Agony: The Warsaw Ghetto Diary of Chaim A. Kaplan): recorded:

“Hanukkah in the ghetto. Never before in Jewish Warsaw were there as many Hanukkah celebrations as in this year of the wall. But because of the sword that hovers over our heads, they are not conducted among festive crowds, publicly displaying their joy.

“Polish Jews are stubborn: the enemy makes laws but they don’t obey them. That is the secret of our survival. We behaved in this manner even in the days when we were not imprisoned within the ghetto walls, when the cursed Nazis filled our streets and watched our every move. Since the ghetto was created, we have had some respite from overt and covert spies, and so Hanukkah parties were held in nearly every courtyard, even in rooms which face the street; the blinds were drawn, and that was sufficient.

“This year’s Hanukkah celebration was very well attended. We almost forgot that we are only allowed to go as far as the corner of Nalewki and Swietojerska streets. Dr. Lajfuner gave a speech full of jokes and we all laughed heartily. There was one truth in his speech which should be stressed: In all the countries where they want to bury us alive, we pull the gravediggers in with us. Witness Czarist Russia, Poland, and Rumania. Nazi Germany will have the same fate — and in our own time.”

As pointed out by Sydney-born Holocaust researcher Rabbi David Berman (who subsequently relocated to Israel and Warsaw) in his review of Kaplan’s diary: “It would seem that the symbolism of the Jewish rebellion against the superior Greek army was also source of inspiration for some of the fighters in the Warsaw ghetto uprising, just as their own self-sacrifice has inspired subsequent generations.”

And that was only one of many recorded instances of Chanukah observance during the Shoah. Even in Bergen Belsen in 1944, Chanukah lights on a primitive makeshift menorah were lit by the Rebbe of Bluzhov. Asked by one bystander how amidst the death and darkness he could recite the blessing “shehecheyanu, — thanking God that kept us alive to this time”, he responded that indeed at that point he had hesitated. But when he turned and saw so many tortured, starving Jews watching him, keen to see the Chanukah lights, he indeed felt he could thank God that there were still even in those times many who believed. (Similarly, decades later, even while in the gulag, Natan Sharansky would find a way to light Chanukah lights.)

So much for Chanukah in the times that darkness covered the world. But as in the Haggadah we find a hint to Chanukah in that amidst many incidences of salvation, God took us out “me’afelah l’or gadol – from darkness to a great light”.  So too a few short years later world Jewry, admittedly fewer in number but with strength of spirit, celebrated their first Chanukah with renewed Jewish statehood. And in that regard I turn to the editorial of The Australian Jewish News on Friday, December 24, 1948.

Under the heading “A very different Chanukah” the editor wrote:

“The Feast of Chanukah commemorates the miraculous defeat of the Syrian heathen host by the little band of the heroic Maccabees, emphasising not only the survival of the Jew but the still greater miracle, the revival of Israel despite defeats and persecutions.

“Over two thousand years ago, the Maccabees, though greatly outnumbered, miraculously won their freedom. There, opposing the Jewry of the day, were the mighty hosts of Antiochus who was determined to totalitarise his empire by exterminating minorities and their right to freedom.

“When the Jews saw the hosts of their enemies they feared, But Judah Maccabeus’ answer conveyed that more powerful than physical might is the power of the spirit. The Sword may conquer but ultimately it is the Spirit that triumphs.”

The editorial concluded: “This year, 5709, twenty-one hundred and thirteen years after the Maccabean uprising, will be vastly different from the Chanukah celebrations of other years – indeed much more glowing and happy.

“For after more than two thousand years we are lighting the candles in the Jewish Homeland. Although we all shall be reminded of our martyred dead of 1939-45, this year ‘Shehecheyanu’ will be said with infinite gratitude for the renewal of Jewish life in the Jewish National Home, Israel.”

We too should take note and recite it with gratitude for all the blessings of our nation in this generation.