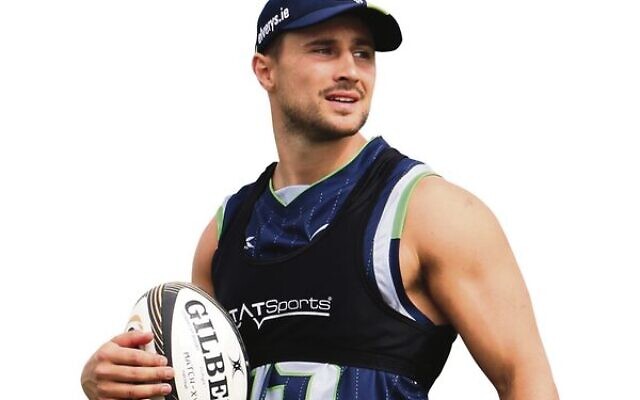 Former Super Rugby and Pro 14 player David Horwitz, is in Australia's Maccabiah rugby squad, and is set to play in the 'Kosher Cup' versus Northern Saints on June 9. Photo: Connacht Rugby Club

It’s hoped there will be a carnival atmosphere and a bumper crowd of more than 500 rugby fans at Hassall Park in St Ives on the evening of Thursday, June 9 for the inaugural Kosher Cup trial game, between hosts the Northern Saints and Maccabi Rugby Club.

The main game, to kick off at 7.30pm, is set to feature former Super Rugby stars Sam Wykes (for the Saints), and David Horwitz (for Maccabi).

Horwitz, 27, retired in early 2021 after playing two seasons for Pro 14 Irish club the Connacht Eagles, but has decided to put on his footy boots again as a member of Australia’s rugby team for the 2022 Maccabiah Games, where he will play alongside his brother Sam.

The free event will be held in honour of the late David Emanuel, a former Wallaby and Jewish rugby legend who passed away earlier this year, and who loved being involved with Maccabi rugby.

Earlier, from 6pm to 7.15pm, there will be a rugby Sevens girls’ U16 and U18 mini-tournament, featuring local schools.

Northern Saints vice-president Michael Amler, who is Jewish, came up with the Kosher Cup idea after the last trial played between the two clubs in April, which Maccabi won.

This time, both clubs will be at full strength, and Maccabi will use the match to further fine tune its preparation for the Maccabiah Games in Israel.

Amler said, “We hope many Jewish students and young rugby fans, from Masada College and other schools, come out in droves to enjoy the Kosher Cup.”

“The idea is to grow the sport among Jewish players in both the north shore and the eastern suburbs, honour David Emanuel, and offer a great game, and occasion, for rugby fans.

“We (Northern Saints) have about half a dozen Jewish players in our Division 4 first and reserve grade squads, and I know our non-Jewish players are feeling proud to be part of this special event too.”