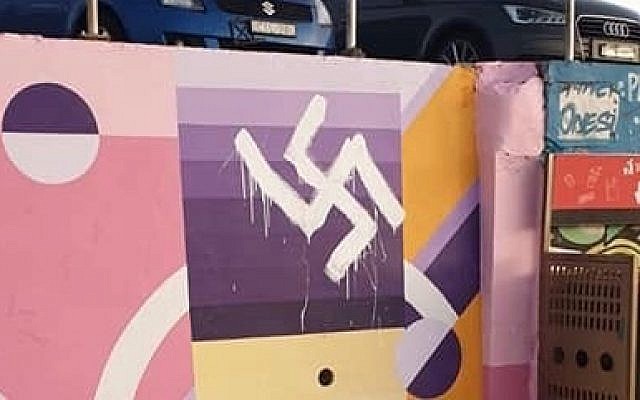 A swastika that was scrawled along the Bondi Beach promenade in April 2019.

THE NSW Jewish Board of Deputies (JBOD) will give evidence early next year at a public hearing into banning Nazi symbols in the state.

The Standing Committee on Social Issues is conducting an inquiry into the provisions of the Crimes Amendment (Display of Nazi Symbols) Bill, which was put forward in October by shadow minister for police and counter terrorism, Walt Secord.

The bill seeks to prohibit the public display of a symbol of, or associated with, the National Socialist German Workers’ Party, the Third Reich or neo-Nazism. There are special protections for the Hindu, Buddhist and Jain faiths.

It has been the subject of several years of consultation, discussion and advice from a wide-range of community groups including the Hindu Council of Australia and JBOD.

It was specifically designed to ban the hooked cross – the Hakenkreuz. There are also exemptions for academic, research and artistic purposes.

Secord said the hearing, written submissions and the public survey would provide an opportunity for members of the public to express their support for the legislation amid a rise in recent neo-Nazi and extremist activity in NSW.

JBOD CEO Darren Bark and former president and honorary life director Peter Wertheim will be representing the state roof body at the public inquiry, alongside a submission being prepared for the committee to review.

“This follows our support for the bill, and the collaborative work we have undertaken with the Hindu Council in NSW to provide joint feedback,” Bark said.

“We look forward to the discussion and the implementation of this law, making it a crime to publicly display Nazi symbols in our state.”

The hearing is on February 3, while the committee is due to report back to the Upper House on February 22.

Members of the community can also have their say on the bill via an online questionnaire, which closes on January 12.

“Having your say is an important part of a committee inquiry. We look forward to receiving feedback from the public on the proposed amendment,” committee chair Peter Poulos said.

NSW could become the first state in Australia to ban Nazi symbols if the bill becomes law.