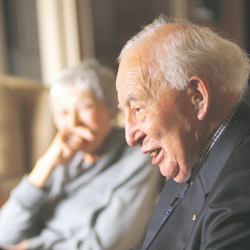 “I DON’T think anybody envisages 90 in my generation,” Sir Zelman Cowen said in his self-effacing way. “It is a generation that put long life at 70; 90 seems a very large dose.”

Nine decades seem a lot of life to have lived, and Sir Zelman has packed more living into his 90 years than most people could fit into three lifetimes.

When asked that cliched question -— what do you attribute your long life to? -— Sir Zelman responded with a twinkle in his eye and an equally cliched answer: “Eat your Wheaties”.

Two weeks before his birthday, The AJN visited Sir Zelman at his home in the Melbourne suburb of Toorak.

Having battled Parkinson’s disease for some years now, one could be forgiven for expecting to meet a frail, aged man. Sir Zelman, however, is anything but.

The illness may have slowed him down, but his mind remains sharp. He retains the appearance of a worldly and educated man, and any tasks he struggles with, his doting wife, Lady Anna, assists with.

It would be remiss, in fact, to write anything of Sir Zelman without mentioning his wife, and the mother of their four children, Lady Anna.

During the interview with The AJN, she filled in forgotten anecdotes and kindly reminded your correspondent to ask more questions to stop her husband from retelling his entire life story.

When the interview concluded, she played the consummate host of yesteryear: bringing a piping hot pot of tea, replete with tea cosy, into the lounge.

Lady Anna has the enviable ability to make her guests, including lowly journalists and photographers, feel important — no doubt a skill she learnt when entertaining heads of states and their partners during her five years at Yarralumla.

Their marriage followed Sir Zelman’s war service, during which he came under bomb attack in Darwin. He later completed his service in naval intelligence in Brisbane. After the wedding, the young couple set off for Oxford, a university town that would become their home, on and off, for many years.

Despite his mother’s desire for him to practise as a lawyer, his decision to become a Rhodes Scholar in Oxford took him down a different path.

“I had not thought of anything but practice in the whole of my student life [at The University of Melbourne],” he recalled. “I decided as my student days were coming to the end, that I would apply for a Rhodes Scholarship.

“My career was changed for me when as a student at Oxford, I was offered a teaching appointment. It was something I had never dreamed of.

“I decided soon after the teaching appointment was offered to me that I would take it and make my career as an academic lawyer, rather than as a practising lawyer.”

Despite his decision to join academia, he put to rest that old saying that “those who can, do; those who can’t, teach”, by being admitted to the Bar in 1951 and then becoming a Queen’s Counsel in 1970.

ABC board member and the vice-president of Deutsche Bank in Australia and New Zealand, Steven Skala, has been a close friend of the Cowen family since his school days.

He told The AJN Sir Zelman’s passion for Oxford study rubbed off on him when he was casting around for direction towards the end of his undergraduate degree.

“He said the only place to do postgraduate study was Oxford and it was as clear as burning daylight that was what the outcome should be,” Skala said.

Skala, who combines his paying work with positions on the boards of arts, policy and medical organisations, said one of Sir Zelman’s most endearing lessons was how to balance a profession with community work.

“The nature of the man was that he could live in the public — working in public institutions as governor-general and in universities — but this was always perfectly compatible with the private man and living a full life,” Skala said. “He is the living epitome of being able to do all of those things.”

It was academia that took up most of Sir Zelman’s “public” time. He spent 16 years, until 1966, as dean of the School of Law at The University of Melbourne.

“Teaching was apparently something I was very suited to,” he told The AJN. “It is very pleasing to see old men tottering along and stopping me to say, I remember when you taught me at Melbourne university.”

It is a droll remark to hear from a man who is entering his 10th decade.

Sir Zelman’s most famous role came about as somewhat of a surprise.

In his memoirs, he wrote that the then prime minister Malcolm Fraser telephoned him to invite him for a meeting in Canberra.

He wrote of the phone call: “I thought it unlikely that the intent was purely social, but I had no specific idea of its purpose.”

At the meeting, Fraser told Sir Zelman that Sir John Kerr -— the governor-general at the time -— had indicated his intention to resign.

Asked about his personal highlight from the past 90 years, Sir Zelman told The AJN it was undoubtedly his five years as Australia’s head of state.

“That was beyond the scope of any dream,” he said. “It happened curiously that I was the biographer of [Australia’s first Jewish, and first locally-born governor-general Sir] Isaac Isaacs. I met him very briefly, very passingly in his old age, when he was presenting some prizes.”

He described the meeting in his memoirs: “I talked briefly with him, if ‘talk’ be the appropriate word to describe what took place in an encounter between an awe-struck boy and an eminence who the boy viewed as a colossus.”

Despite his own later “eminence”, it is clear that Sir Zelman, to this day, remains somewhat “awe-struck” by Sir Isaacs. Sir Zelman’s biography of Sir Isaacs was published in 1967.

He referred to Sir Isaacs a number of times during the interview, seemingly trying to confirm your correspondent knew who he was and understood his importance in Australia’s history.

It is a sign of a great man, that despite his own personal achievements and accolades -— and there have been many -— he still has time to admire the greats who have come before him.

Aspiring politician Joshua Frydenberg, a close friend of Sir Zelman for the past 20 years, said he considers the former governor-general to have held three careers: in education; as the head of state; and then in public positions after stepping down as governor-general, including as chair of the British Press Council and Fairfax.

“He always contributed to the public debate in an insightful and considered way,” Frydenberg, the Liberal candidate for the federal seat of Kooyong, said.

Despite being a generation or two apart, the pair meet for breakfast weekly.

“I often sit and listen to his views,” he said. “They are always sensible, considered and balanced. I have always found that [Sir] Zelman was seen as above the rancour of partisan political debate.”

Having observed a lot during his “three careers”, The AJN asked Sir Zelman what sort of changes he has noticed.

“There has been great growth, there has been development of the modern state. Australia, in its period of life, has grown into a sophisticated and mature society,” he said.

“It has grown from a rural base to a complex, technologically equipped society and has developed mature, political and legal federal institutions.”

He also praised this country’s ability to absorb migrants successfully.

“The Australia in which I have come to live and work in as a mature adult is multicultural. We’ve set about the task of becoming a multiracial and multicultural society -— some of the problems have been hard, not least the problems with our indigenous society. I think we have still got some way to go.”

Since his childhood in prewar Melbourne, Sir Zelman has been involved with the Jewish community. He still speaks fondly of weekends spent at the Junior Melbourne Hebrew Society under the supervision of Rabbi Israel Brodie — then a rabbi in Melbourne, but later the Chief Rabbi of the Commonwealth.

Unlike many prewar arrivals, Sir Zelman’s family first settled in St Kilda, rather than the existing community in Carlton.

From those early days until now, Sir Zelman has kept close tabs on the local Jewish community and also Israel, where he was intricately involved with the Hebrew University of Jerusalem for many years.

Those connections continue and he is sharing his birthday with the Jewish Museum of Australia, as it attempts to raise $1.5 million to refurbish its Australian Jewish history gallery.

Sir Zelman has lived a large portion of Australia’s Jewish history and explained how pleased he was to have watched the community grow.

It is fitting for the last word to go to Sir Zelman’s long-time friend John Gandel, who hosted a birthday party last week, attended by, among others, Prime Minister Kevin Rudd.

Gandel said: “He is humane, fair and open-minded, as well as being incisive and clear sighted … Sir Zelman has served as an exemplary role model for us all, fighting passionately for what he believes while enlisting support from others for so many important projects. He does so without ego, but with determined and focused enthusiasm and belief.”

Sir Zelman and the museum

THE Jewish Museum of Australia (JMA) is in the Cowen family’s blood.

Sir Zelman Cowen’s sister, June Helmer, was a founder of the Melbourne-based museum and is a former vice-president.

She called Sir Zelman’s decision to share his birthday with the museum “very suitable and very wonderful”.

“He has worked very hard for Jewish causes and other causes as well,” Mrs Helmer said.

Sir Zelman, who is patron of the museum, said he was very proud of the JMA.

“I think the museum plays an important part in educating the community, both the Jewish community and the whole of Australia,” he said.

With the help of its patron, the JMA is hosting a range of community and private events to raise money for its planned refurbishment of the Zelman Cowen Gallery of Australian Jewish History, expected to cost $1.5 million.

JMA director Dr Helen Light said Sir Zelman had been there from the beginning, and having him as patron “gives the organisation the authority and weight that a name such as his lends”.

“More than that, Sir Zelman has been an active and positive patron. He has always spoken for us on formal occasions when asked. He has written many an introduction of reference for the museum and actively fundraised for us when we were seeking to buy these premises.”

A large public event will be held on Sunday, October 25, jointly hosted by JMA and the Jewish Community Council of Victoria, which will be attended by Governor-General Quentin Bryce.