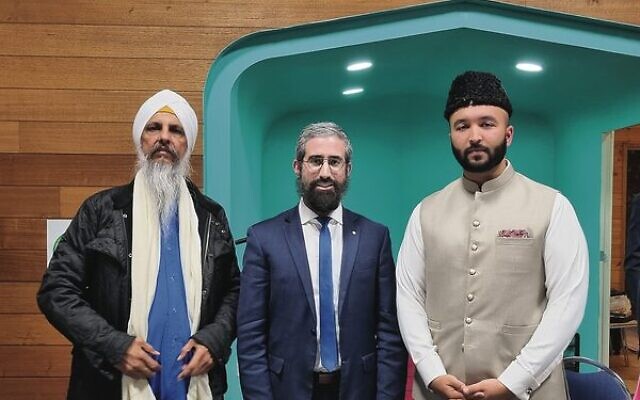 Rabbi Yaakov Glasman represented the Jewish community and the Rabbinical Association of Australasia earlier this month at the ‘Love for all, Hatred for none’ solidarity event at the Ahmadiyya Mosque in Langwarrin.

Rabbi Glasman met with the Imam S Wadood Janud to show solidarity after the attack on the mosque that took place in the early hours of a Sunday last month.

He attended alongside congregation members, members of the public, state and federal members of the Parliament, mayors, media, and community and faith leaders.

The St Kilda Shule senior rabbi was the only representative from the Jewish community, however other faith leaders attended from the Sikh and Muslim faith communities.

Rabbi Glasman said that he was “honoured” to have been invited to speak to the Muslim community, adding that he “shared the message of Abraham our forefather who opened his tent to wayfarers as a symbol of welcome and inclusion of all people irrespective of their faith”.

The attack on the House of Peace Mosque was carried out by a group of male intruders between the ages of 18 and 62, causing thousands of dollars worth of damage.

The vandals were caught on security footage, and were seen damaging the prayer area, breaking into a locked office and storeroom, and tearing up a badminton court and book displays.

The group also rode bikes around the prayer room, a sacred space for those who worship there.

Rabbi Glasman told The AJN, “The fact that so many faith and political leaders attended the Ahmadiyya Mosque’s solidarity gathering was deeply heartening and spoke to the common humanity we all share.”

He said supporting other faith communities experiencing hardship is “so incredibly important”.

“We cannot just be there for each other during the good times,” he said.

Rabbi Glasman has since invited the Imam to St Kilda shule on Wednesday, July 20, as well as Catholic Archbishop Peter Comensoli to have all three Abrahamic faiths represented, and to continue fostering inter-faith relationships.