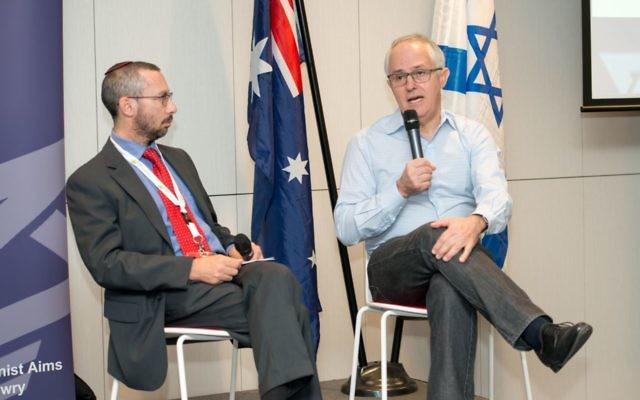 COMMUNICATIONS Minister Malcolm Turnbull and Israeli columnist and editor Shmuel Rosner engaged in a vibrant, robust conversation at the Zionist Federation of Australia’s 2015 plenary on Sunday.

The hour-long discussion at the Sydney Jewish Museum covered a range of topics including the Iran nuclear deal, the threat of ISIS to Israel, keeping Israel as a bipartisan issue in Australia, and Australia–Israel relations.

Speaking about the Iran deal, Turnbull said the government had “welcomed it cautiously”.

“The best that you can say for the agreement is that it is better than the status quo because it does introduce some degree of oversight,” he said, adding, “I recognise and empathise with the anxiety in Israel, but the judgment’s been made by the P5+1 that continuing the sanctions indefinitely is not going to be successful; military intervention is not going to happen.”

Asked by Rosner if he thinks that the current agreement is likely to prevent Iran from becoming a military, nuclearised state, Turnbull replied: “I think it is less likely that that will happen given the agreement than in the absence of the agreement. Ultimately, what we in the West want, and we includes Israel, is for Iran to have a change of political culture.

“There aren’t 80 million Iranians getting up every morning with no thought on their mind other than the elimination of Israel. Most of them want to get on with their lives, engage with the world, make a buck and go on holidays with their kids; the same as everyone else.”

On the topic of ISIS and the threat it poses to Israel, Rosner said it is simply “not strong enough”.

“Israel has to have its priorities straight. Iran is a serious threat to Israel. Other factions in the region do not pose a threat as serious as Iran,” he said. “It [ISIS] is not strong enough to win victories over the IDF. Israel feels that it can secure itself when it comes to this movement.”

According to Rosner, what Israel is “greatly worried about” is the “chaos that we see all throughout the Middle East”.

“Regimes that can be accountable to something, even if you do not agree with them on everything, are now being replaced by instability and chaos [and it] is an issue of concern for Israel,” he said.

Moving to local issues, Turnbull said “there is reason to be concerned” about the prospect of keeping Israel as a bipartisan issue in Australia.

“There is a weakening commitment to Israel. We saw this at the Labor Party conference,” Turnbull said.

“I think it’s very important that support for Israel is bipartisan. I’ve always resisted the temptation to rev up a partisan approach. I’m thinking very much in Israel’s interest and in the national interest.”

“We need to collaborate more with Israel, particularly on matters of science and technology. The more we can do with Israel, the better,” he said.