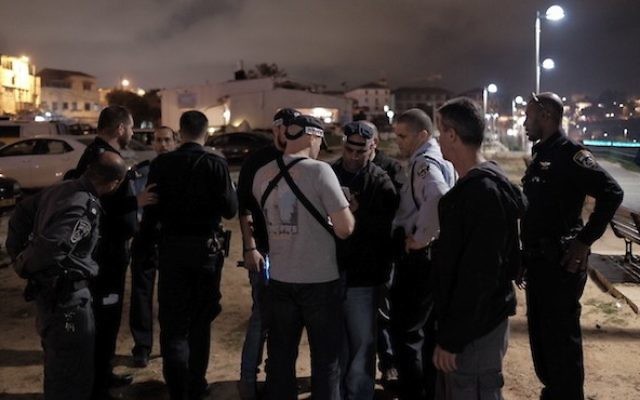 Israeli security and medics at the scene of a stabbing attack where one person was murdered and nine others were wounded in Jaffa Port, Tel Aviv on March 8, 2016. Photo by Tomer Neuberg/Flash90

Serious attacks have almost dried up in recent weeks, and Israelis have been waiting with bated breath for an indication of whether this is a sign of calmer times or a short lull.

A senior member of the Shin Bet told the cabinet in a special briefing on Sunday that anti-terror methods are working and confirmed a “significant decline” in attacks.

He said that forces are succeeding in foiling terror operations, deterring potential attackers and calming Palestinian incitement, and confirmed a “considerable decline” in attacks over recent weeks.

This “has left a sense among the Palestinian public, especially lone terrorists, that escalation is useless”, according to official notes from the closed-door briefing.

The Shin Bet’s briefing on Sunday was followed on Monday by Prime Minister Benjamin Netanyahu suggesting that the Israeli military can take credit for keeping the threat of Hezbollah in check.

He gave his first ever public admission that Israel has struck targets in Syria, saying: “We act when we need to act, including here across the border, with tens of strikes meant to prevent Hezbollah from obtaining game-changing weaponry.”

This statement marked a departure from Israel’s policy of never confirming that it was behind strikes that take place in Syria, even when foreign media point fingers at Jerusalem.

In the cabinet briefing on the Palestinian terror wave, the Shin Bet official said that Israeli forces have taken a smart approach, causing minimum upheaval in Palestinian communities while fighting terror and maintain security links with the Palestinian Authority.

These links have been a priority despite high political tensions with the PA and despite its leadership’s incitement against Israel.

The official said that Israeli forces have made “an effort not to disrupt the fabric of life of a majority of the Palestinian population, which is not involved in terrorism, and to continue cooperation with the Palestinian security services”.

Success in reining in Jewish extremists was also cited as a factor in the de-escalation.  He stated that were 20 significant attacks in March compared to 78 in October.

In April, to date, there have been only three significant attacks. The official revealed that security forces have foiled more than 290 significant attacks since the beginning of 2015, mostly in the past six months, including 25 abductions and 15 suicide attacks.

Some experts said that security forces are taking too much credit for the decline in terror. Hillel Frisch, researcher at the Begin-Sadat Centre for Strategic Studies, told The AJN that in large part the decline was inevitable, because the ranks of Palestinians who are prepared to get killed perpetrating terror has been exhausted.

“What has led to an almost complete drying up of attacks is that this reservoir of people is drying up.”

Hillel Frisch Researcher, Begin-Sadat Centre for Strategic Studies Frisch’s research suggests that at the start of a terror wave there are around 150 Palestinians who have both the drive and skill to successfully carry out an attack which is likely to get them killed.

“What has led to an almost complete drying up of attacks is that this reservoir of people is drying up,” he said, acknowledging that security services “dampen and reduce terror”, but claiming this is less important than people think. “Very few people are able to really put their lives on the line,” he said.

The reality on the ground is likely to be different depending on whether Shin Bet’s analysis or Frisch’s turns out to be more accurate. According to Frisch a substantial new “reservoir” of terrorists prepared to die for their cause will not be ready for several years, while according to Shin Bet lethal terrorism is continually bubbling.

The official warned that despite his optimism the situation could change at any time because of terrorists who want to “undermine stability”.