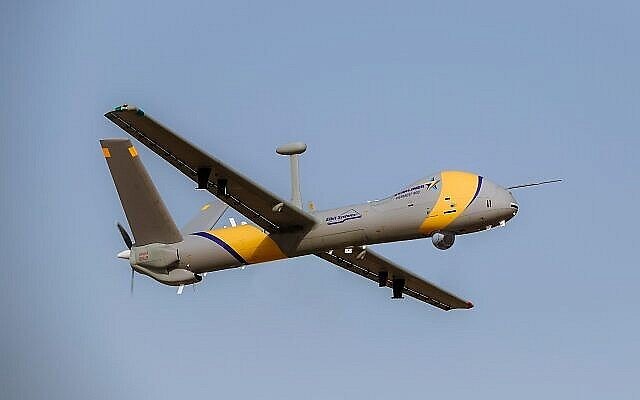 The Transportation Ministry certified the Elbit defense contractor’s StarLiner drone to fly in civilian airspace, making Israel the first country in the world to allow unmanned aerial vehicles of this type to do so, the company said Wednesday.

The Civil Aviation Authority of the State of Israel issued its permit in late December after a more than six-year evaluation period, though the company only announced the regulation change on Wednesday.

“We are proud to issue the Type Certificate to the Hermes StarLiner UAS, approving it to fly in civilian airspace as any other civil aircraft. As far as CAAI is aware, this is a world-first,” the head of Israel’s Civil Aviation Authority, Joel Feldschuh, said in a statement issued by Elbit. UAS stands for unmanned aircraft system.

Most currently available UAVs lack the necessary sensors to operate in civilian airspace without interfering with other aircraft. As a result, many countries have laws forbidding powerful drones that reach high altitudes from flying in civilian airspace.

Elbit’s StarLiner drone is a modified version of its Hermes 900, which is used by militaries around the world, that was made to comply with civil aviation requirements by installing sensors to identify other aircraft and avoid collisions with them, an additional warning system to prevent it from approaching or crashing into the ground, autonomous takeoff and landing systems in no-visibility conditions, and other modifications.

The StarLiner is meant to allow governments and security agencies to gather intelligence domestically — both for internal security purposes and to track the local environment and climate change — in areas where drones currently cannot fly. For instance, when a non-modified Hermes 900 was used to provide additional security during the 2014 World Cup in Brazil, the rest of the airspace where it was operating had to be cleared of traffic.

“The approval granted to a UAS to fly above populated areas and in any civilian airspace enables governments as well as international and commercial organisations to incorporate large, long-endurance unmanned aircraft in missions that until now were only performed by manned aircraft,” Elbit said in its statement.

Though the certification will only apply to Israeli airspace, it was expected to increase the likelihood of acceptance internationally.

“The receipt of the Type Certificate from the CAAI completes the compliance of Elbit Systems’ Hermes StarLiner UAS with the NATO standardisation for approving UAS for integration in civilian unsegregated airspace,” the company said.

This world-first title was originally meant to be held by Switzerland, which had signed agreements with Elbit to acquire the StarLiner and was meant to begin operating the drone in 2019. However, a series of setbacks — notably a drone crashing during a test flight in 2020 — have postponed the completion of the sale, with the Swiss only likely to receive the drones in mid-2022, three years after the initial delivery date. An Elbit spokesperson did not immediately comment on when the UAVs were meant to be delivered.

Transportation Minister Merav Michaeli, whose office certified the drone, hailed the move, saying it was a breakthrough that would ultimately benefit the public, in a filmed statement to Channel 12, which first reported on the approval.

“The Transportation Ministry is keeping Israel at the technological forefront, where it can continue to lead in these areas and to make new breakthroughs. I am proud that Israel is the first country whose civil aviation authority is allowing a drone to operate, for agricultural, environmental protection, crime-fighting and for the good of the public and the market,” Michaeli said.

Though the aircraft was permitted by the Transportation Ministry to conduct such operations, it was not immediately clear if any Israeli non-military government offices had purchased the StarLiner so far. An Elbit spokesperson did not immediately comment on the matter.

In addition to selling the StarLiner drone to Switzerland, Elbit Systems has also agreed to provide the UAV to the Canadian Ministry of Transportation.