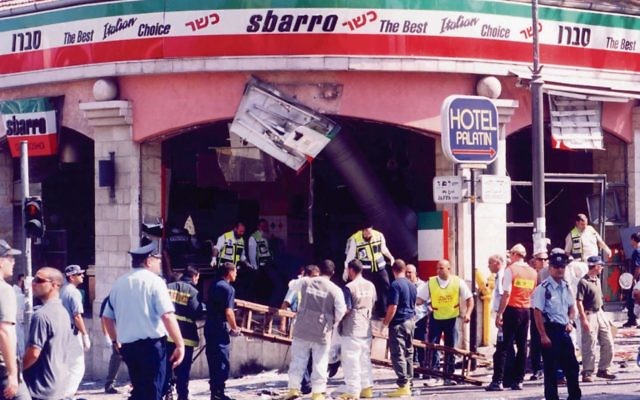 The terrorist who masterminded the Sbarro bombing lives feely in Jordan and enjoys celebrity status.

ISRAEL has passed a new law to hit the Palestinian Authority in the pocket as long as it insists on paying terrorists.
For every shekel that the PA spends on its monthly stipends to terrorists, Israel will freeze a shekel-and-a-half that would otherwise be headed to Ramallah.

The Knesset law passed just hours after Australia terminated its funding to the PA. This added up to a “double blessing” in the fight against terror, Elazar Stern, who promised the legislation, told The AJN.

Israel’s Defence Minister Avigdor Lieberman lauded the law, saying, “An effective war on terror also goes for the pocket of the terrorists, their families and [Palestinian President] Abu Mazen.”

Commenting on the Australian decision Stern said that it will help to reduce terror and promote peace because “incentive to terror stands at the core of the conflict,” and if this incentive is reduced, there will be less terrorism.

He said that Australia is setting an example and “every country sending money anywhere should know where it’s going.” He commented: “We’re not against helping Palestinians with food and humanitarian money, but if money is going to terror the stopping this will help advance peace.”

Oded Forer, a Knesset member with Yisrael Beytenu, told The AJN, “We welcome this move by the Australian government, which joins Israel and the US in saying enough to the Palestinian Authority leadership and its ‘pay to slay’ payments.

“The international community claims it wants peace yet continues to fund terrorism, violence and bloodshed. We hope that other governments will follow the Australians, stop their funding of conflict ,and help us to reach peace, security and prosperity.”

Arnold Roth, an Australian-Israeli whose daughter was killed in an attack said that he is particularly pleased by Australia’s move as his daughter’s killers receive PA stipends. “The decision by Australia to call the Palestinian Authority’s bluff is clear, strong and completely justified,” he said.

The Israeli organisation Shurat Hadin, which works to cut funding to terror and terrorists, enthused about Australia’s move. Its head Nitsana Darshan-Leitner told The AJN that Australia has become “a lighthouse which hopefully other countries will follow.”

David Bedein, director of the Centre for Near East Policy Research think tank in Jerusalem, said that Australia’s move “would seem to be a step in the right direction of accountability,” but expressed concern that the PA won’t feel the impact because “funds which are cut from the PA will be replaced by Saudi Arabia, Qatar and other Arab states.”

Israel holds PA funds because, in line with treaties, it collects certain taxes on Ramallah’s behalf, and then passes the money along. According to the new law, Israel will deduct one-and-a-half times the PA’s spend on stipends to terrorists when it makes a transfers to Ramallah. The government will then decide if and when to release the funds.

Avi Dichter, a politician who proposed the law along with Stern, declared in Knesset that it was needed because the PA “has turned itself into a factory that employs murderers”.

Dichter declared, “It’s very easy to get accepted to this factory. All you have to do is kill Israelis, and you get hired to work in the factory.”

Stern told The AJN, “We expect the law will actually cut down terror because what a young person can get for committing terror is many times what they would earn working. Young people know they can help their families earning lots of money through terror.”

The law had broad support in the government and the opposition, and was proposed by a cross-party alliance. Dichter is from the ruling Likud while Stern is from the opposition Yesh Atid, and the law passed 87 votes to 15.

Criticism largely focussed on concerns that the government could end up being pressured by international powers to release the funds to the PA without promises of reform in Ramallah.

The Arab party Joint List strongly criticised the law, and its legislator Yousef Jabarin said that the legislation’s “sole purpose is to perpetuate the occupation.”

His fellow MK Ahmad Tibi claimed that Israel approved the “armed robbery of the allocations of the Palestinian people.” And the Palestinian Authority cabinet released a statement calling Israel’s move “real financial piracy and theft [of] Palestinian funds”.