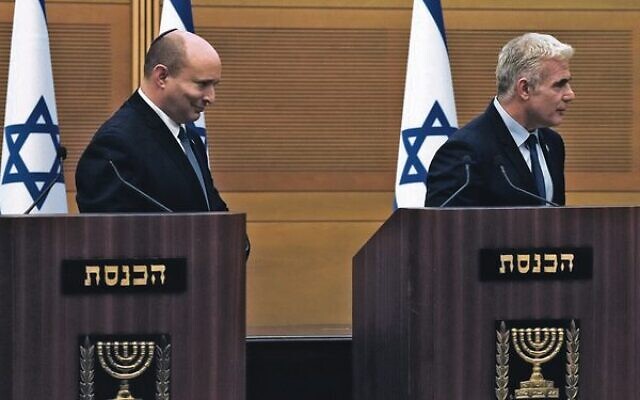 Israelis will vote in their fifth election in 42 months after Prime Minister Naftali Bennett and Foreign Minister Yair Lapid announced overnight on Monday they are dissolving the Knesset and their eight-party government.

But a number of defections over the last few months dented its footing, with the final straw coming last week when the government proved unable to pass an important piece of recurring legislation. The dissolution paves the way for a potential return of Benjamin Netanyahu and his coalition of right-wing and religious parties.

Zionist Federation of Australia public affairs director Bren Carlill said that while yet another election will not be something most Israelis look forward to, “We take pleasure in the smooth and cooperative transfer of power, and that the decision to dissolve the government was not acrimonious.

“Although the Bennett government was not long-lasting, it was marked by respect and cooperation. The leadership shown by Prime Minister Bennett and incoming Interim Prime Minister Lapid has set the example, and we thank and congratulate them.”

He added the government will be remembered for the decision to include an Arab party in the coalition.

“At the time a momentous decision by both Jewish and Arab parties, we believe the involvement of Arab parties in Israeli governing coalitions will become normal, and so it should.”

Executive Council of Australian Jewry co-CEO Peter Wertheim told The AJN, “Israel needs wise and sustained leadership which can restore the country’s unifying sense of national purpose as it faces the looming threat of a nuclear-weapons-capable Iran, maniacal terrorism and a relentless, racist campaign of international delegitimisation.

“On the positive side, the outgoing government pioneered the idea of Arab parties being included in a governing coalition in Israel and MKs from those parties being appointed as ministers.”

Australia/Israel & Jewish Affairs Council executive director Colin Rubenstein noted that despite its collapse after only one year in office, the government could point to “significant achievements”.

“These include passing a long overdue, desperately needed national budget, significant strides in improving Arab-Jewish relations inside Israel, maintaining recovery from the pandemic, and in foreign policy, numerous new steps building on the promise of the historic Abraham Accords,” he said.

“Israelis will again go back to the polls for the fifth time in three-and-a-half years to make their democratic choice, and hopefully a government with a stable majority can emerge, better able to deal with the multiple domestic and regional challenges the nation confronts.”